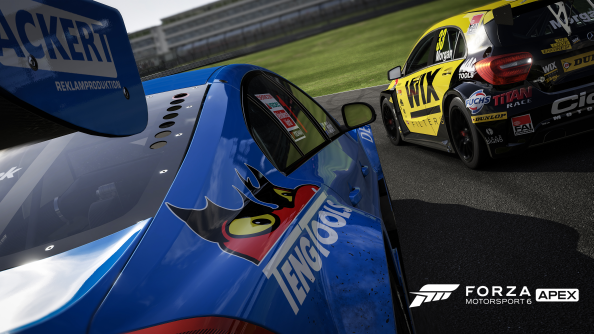 Gosh, that’s a relief. If you’re a PC gamer and can’t see your way to also buying an Xbox One, Big Phil Spencer is at peace with it.

Asked at a recent Microsoft event why a Steam-lover with a monster machine would want to buy an Xbox One, he replied, after a long pause: “You might not.”

Why not pick a racing game to tide you over until Forza?

“I’m not trying to trick you into buying an Xbox One,” the Xbox boss went on. The sudden PC appearance of the longtime Xbox exclusive Forza Motorsport as the free-to-play Apex? That’s not a way to lure you over to Phil’s way of thinking.

Phil was able to think of a few reasons why PC gamers might want an Xbox One, however – the eternal appeal of couch co-op; shared saves and cross-system profiles; the end of “disconnected islands”.

“If you decide that you want a PC gaming rig and to have an Xbox One, the fact that Microsoft has a presence in both of those places is gonna make your life better,” he concluded.

Spencer’s referring to a renewed initiative within Microsoft to play a role in Windows gaming. Key to that is Windows 10’s planned Universal Windows Platform, which Microsoft say is a “fully open ecosystem”, but which Epic boss Tim Sweeney worries could lock down PC game distribution. Are you worried?