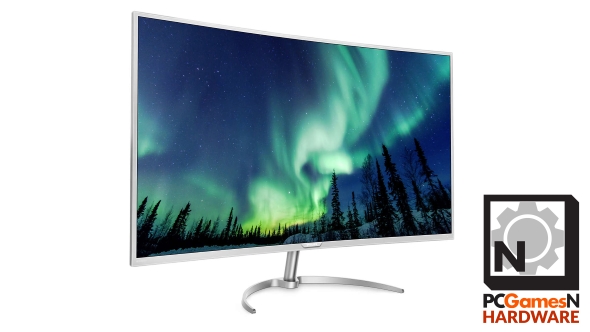 A 40-inch PC monitor is a joke, yeah? That’s TV size, what on Earth would possess you to stick that on your desktop? You’ll melt your face off, right? Nope. This is how you make 4K gaming a genuinely jaw-dropping experience.

Pixel perfect panels are what you want, so check out our pick of the best gaming monitors around today.

Size matters, especially when you’re talking about jamming 8.3 million pixels into a monitor panel. Look at a 27-inch 1440p monitor side-by-side with a 27-inch 4K screen and I’d challenge you to be able to tell the difference in a blind taste test. It’s certainly doable but it’s difficult.

Now transpose that to a 40-inch panel and the shortcomings of the 2560×1440 resolution would quickly become apparent while a native 4K screen would display all the glorious, miniscule detail you will have missed on a smaller screen.

That’s why such large-scale monitors as the $1,000 (£595) Philips BDM4037UW do actually make sense at 4K – you’re giving the ultra high-definition resolution a chance to really shine. 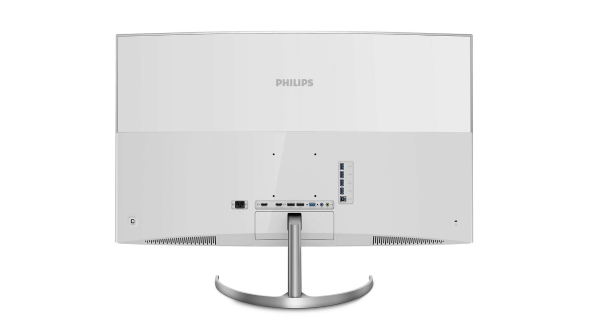 The Philips BDM4037UW is a bit of a beast and has made me rather a laughing stock in the PCGamesN office, even more so than the usual rag-on-the-hardware-nerd-in-the-corner stuff. It looks at once beautiful and faintly ridiculous sat next to my now-diminutive regular 27-inch screen, it also acts as a bit of a barrier between the rest of the office and ‘Dave’s Tech Corner.’ It does get kinda lonely over here now…

At 40-inches across the diagonal the panel feels huge when you’re first sat in front of it, though that most modest of curves (just 3,000R) brings the extreme edges of the display back in to meet your eyes. And, as a modern 4K screen, it’s sporting the standard 3840×2160 resolution with a 60Hz refresh rate.

It’s actually got a rather impressive specs list for an affordable, large-scale monitor. As well as the 4K60 setup it’s also rocking a 4ms grey-to-grey response time, a contrast ratio of 4,000:1 and peak luminance rated at 300cm/m2. In terms of the actual panel technology at the heart of the big-screen Philips they’ve used a 10-bit VA display to give you that mix of speedy response and decent colour accuracy.

I’m not 100% sure, but I’m pretty confident we’re looking at a 40-inch curved VA panel ripped straight off Philips’ TV production line. I can’t believe there are too many such screens created specifically for such a niche monitor, especially not ones that could be this affordable. 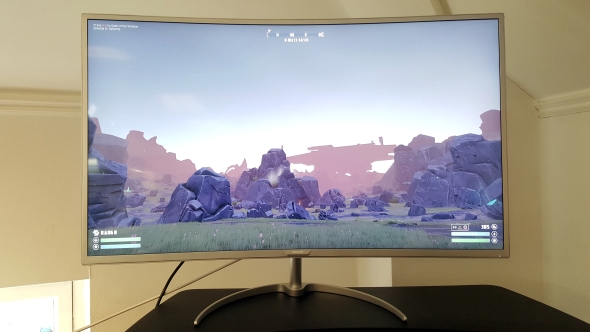 I have to admit my initial reaction to placing the BDM4037UW on my desk was one of joy at such a beautifully big, colourful screen, yet on booting into Windows that changed to a creeping feeling of revulsion. That’s not a great first impression and made Dave a sad panda – I’d been hoping for a similarly pleasing experience to when I tried Philips’ other, short-lived, 43-inch 4K monitor. The issue here though is the level of VA ghosting you get on the desktop; it really is pretty bad.

With a relatively dark backdrop shifting a File Explorer window about the screen leaves an obvious obnoxious after-image for near half a second on the predominantly white space. You get the same effect flinging around browser windows to. It’s quite disconcerting and makes general desktop/productivity usage an initially unpleasant experience. Though if you’re not throwing objects about your desktop with gay abandon it’s fine, but quickly shifting a window about might suddenly make you want to vom up a little in your mouth.

That stretches into its video playback performance too, with medium-res Netflix streams generating bizarre red-orange blobs as the panel struggles to deal with the motion on offer. The issue is lessened with higher-resolution content, such as full HD and native 4K video, but there is still a certain amount of ghosting visible in some fast-moving, high-contrast scenes. 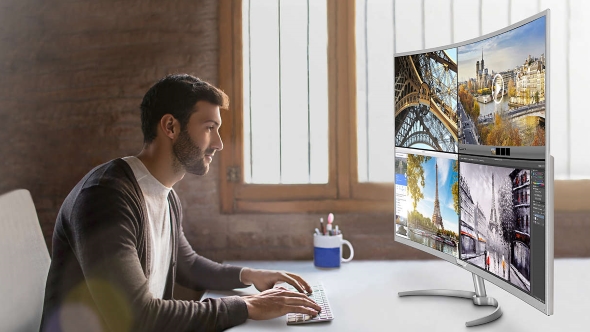 And that ghosting is still apparent in games too, but again it seems to be to a lesser extent. With certain genres though it is almost invisible; racing around the Welsh valleys of Dirt Rally I simply had a beautifully bright, crisp, detailed vista flying past the windscreen. At least until I flipped my tricked-out Peugeot and that vista came flying through the windscreen… It’s the same with the gorgeous FPS-ish The Signal From Tolva too. Writ large over 40-inches of 4K screen space it looks absolutely stunning and plays flawlessly. And you’d be surprised just how quickly you grow accustomed to sitting directly in front of such a capacious screen.

But again it’s that bane of gaming monitors, FIFA, which once more highlights the ghosting issue the panel suffers from. With the fast-paced player movement you end up with ghostly little trails misting out behind them and the brightly coloured controller indicators above their heads bleeding coloured smudges as the players jink and dodge around the pitch.

Aside from that ghosting issue though the panel itself is pretty decent. The contrast is impressive, only really losing definition at the very darkest end of the scale, and the black levels aren’t bad either. They’re not as good as I’d typically expect from a VA panel, but a quick scan of the white saturation performance shows the initially high factory default gamma setting might be a little off.

You also get a certain amount of colour shifting at the extremities of this extremely large monitor too. Even though the curve helps bring the sides and corners back in towards the viewer’s eyes there is still a slight difference to the colour you get in the middle of the screen to what you see at the edges. 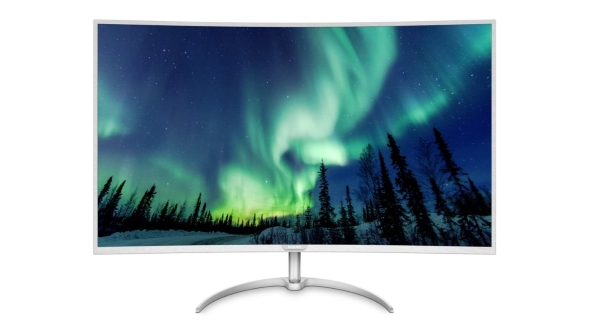 There is a lot I like about this super-scale Philips monitor. The VA panel means the colours are bright and vibrant and, on static images, the 4K resolution is beautifully clear. With a 40-inch screen you really do see the benefits of all those 8.3 million pixels.

Nowhere is this better illustrated than in gaming. Sure, you need a powerful GPU to run games at 4K – I tested the Philips with a GTX 1080 Ti – but a good monitor should easily last beyond your current rig’s graphics card. The next generation of cards maybe aren’t going to bring 4K performance down into the mainstream level, but ought to get much closer than any of the current crop of cards.

And, for the most part, games look incredible running natively at 4K on such a huge screen. The impact of the increased resolution is hard to see on smaller panels, but at 40-inches the extra detail 4K affords makes things achingly sharp and detailed. Though it can highlight low-res textures and other game assets on titles not designed to be seen at this level of image fidelity. You’ll be cursing lacklustre PC ports with even greater levels of vitriol with a large 4K screen.

But the panel’s ghosting issues cannot be ignored. They’re most significant when on the Windows desktop and in lower-resolution videos, and though less pronounced in-game they are still there. It’s a real shame as the extra screen real estate really is a positive boon. By offering a pixel pitch not far off that you’d get with a 27-inch 1440p panel you can happily run your screen at the standard 100% scaling which means you don’t have to deal with any of the weird artefacts or strange spacing you sometimes get when Windows tries to expand things on smaller high-res screens.

I so desperately wanted this affordable (at least in the UK), large-scale 4K monitor to be a winner. This is the scale at which 4K gaming actually becomes visibly superior to running at 1440p on a smaller screen. But when you’re having to put up with the sort of ghosting issues apparent on the Philips BDM4037UW it’s hard to then recommend it over a smaller, lower-res display with a more solid panel. The ghostly trade off is probably just too great.