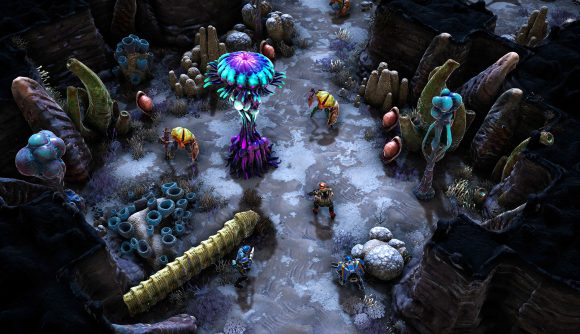 Tactical strategy gem Phoenix Point is about to receive its sixth major update tomorrow. The spiritual successor to X-Com, Phoenix Point was created by Julian Gollop himself and his team at Snapshot Games, which released its turn-based strategy game back in December 2019, and it’s been steadily updating since.

Patch 1.8 ‘Arkham’ will build on the other improvements rolled out over the past year (the last big patch was 1.6 ‘Necronomicon’, released in August), and comes with a lot of Geoscape improvements. There’s new base selection functionality and a reworked personnel screen, a better UI to show where units are located across the various bases, even a new game over screen.

Don’t forget that the exclusivity deal with Epic will run out on December 3, 2020, and Snapshot has announced that Phoenix Point’s Steam release will be coming on that very day: December 3. It’s launching with a ‘Year One Edition’ that will include all of the free patches, but also the three add-ons released so far as well: Blood & Titanium, Legacy of the Ancients, and the Living Weapons pack.

Coming back to the 1.8 Arkham update, here’s an excerpt from the patch notes that detail the main gameplay changes.

There’s also a sizable list of bug fixes as well, which you can read about here. The Arkham update will land tomorrow, November 4.