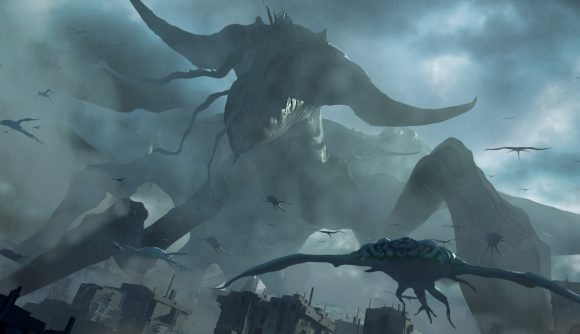 Ahh, Phoenix Point, we meet again – what do you have in store for us this time? It turns out the gang over at Snapshot Games has been busily preparing the XCOM-style strategy game’s next DLC add-on, dubbed Festering Skies. When it arrives, it’ll be accompanies by the Behemoth Update, which includes some welcome quality-of-life adjustments and changes.

First up, though, is Festering Skies. Out May 25, this add-on pack includes a whole new campaign story that deals with the emergence of a gigantic monster from the ocean depths. It’s truly massive, visible on the campaign map, and capable of destroying havens, bases, and exploration sites. It’s effectively a mobile Pandoran colony, and it carries on its back a squadron of airborne monstrosities that can wreak havoc wherever the beast goes.

To stop the Behemoth, you’ll need to shoot down these flyers by scrambling your transport aircraft, which you’ll be able to outfit with weapons and defensive equipment. In a nod to the original X-Com: UFO Defence, Snapshot Games is adding a new interception mini-game, which will test your weapons research and procurement strategies against increasingly tough enemies.

Whether or not you own Festering Skies, you’ll get the Behemoth Update May 25 as well. This patch makes some really nice adjustments to how enemy awareness is displayed, so you’ll have a better idea of where to look for detection threats when you’re trying to sneak around.

The dev team has also taken a pass at the game’s materials, and those will be using a “better calculation of the size and material type” of whatever object a bullet is striking or passing through, and whether it gets destroyed by the impact.

Flying carpets have not, sadly, made it into this update – but we can hope they do in the next DLC.

Festering Skies is right around the corner, releasing next Tuesday (May 25th) but it almost went in a very different direction… a 'whole new world' for Phoenix Point, if you will. 😜#JustKidding #MagicCarpetMonday pic.twitter.com/2Gc7dYpnkT

Some balancing tweaks are being made as well: the Technician’s Remote Control ability and the Infiltrator’s Vanish ability are going to cost more AP, while the Infiltrator’s Sneak Attack ability damage is getting a bit of a nerf. The Scorcher’s ammo capacity and burst fire modes have gotten attention, too.

The next DLC, Corrupted Horizons, is due “late summer” of this year, according to the Phoenix Point roadmap. A fifth, the name of which has not yet been revealed, will arrive this winter.