Due to its successful crowdfunding campaign, Phoenix Point’s first pre-alpha build has now been released to backers, giving them a taste of what’s to come. Now that footage of gameplay is making the rounds, there’s a host of new information to dissect and aliens to fawn over.

I spoke with the head of Snapshot Games and all-around game design legend Julian Gollop about how Phoenix Point is progressing, the process of designing some of the larger monsters, and how the studio plans to balance game difficulty.

Need more? Try out the best strategy games on PC.

“We have used that backer build to test a couple of key concepts in the game,” Gollop says. “The main one is the first-person system and body part targeting.”

The backer build of Phoenix Point boasts an active first-person aiming system that allows soldiers to target specific limbs on enemies. Damaged limbs can slow enemy movement, afflict the ‘bleeding’ status effect, or, in the case of one particular alien, cause them to drop their shield, opening them up to frontal assaults.

“The general principle behind all the creatures in Phoenix Point is that they are modular,” Gollop elaborates. “This is used to model an evolutionary process in the game itself where they will deploy random mutations.” These mutations serve as modifiers that change the way aliens behave and attack your squad. Mutations that do well against your soldiers will live on while ineffective mutations will die off never to be used again, which lends a sense of ownership to each game. 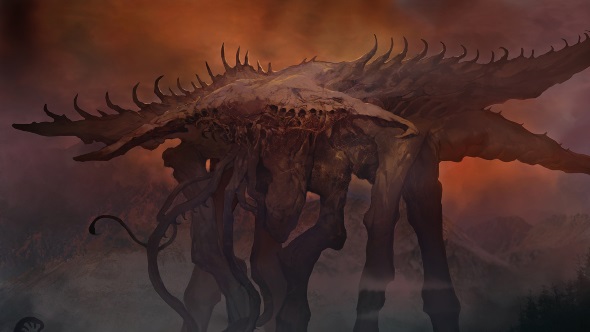 This type of variance is a common thread throughout Phoenix Point and even extends to the game’s boss monsters. In the backer build, you encounter an enormous crab-like monster packed to the brim with health points and armour. Gollop wouldn’t say how many boss monsters will be present in the final build, but he did say that they’re the most complex creatures in the game.

“Each monster generally follows a certain theme,” he explains. The Crab Queen – whose actual name is still being finalised – is themed around spawning enemies and generating the dangerous mist that permeates much of Phoenix Point’s story. In addition, the bosses are just as modular as any other enemy in the game. “For the Crab Queen archetype, there are a possible 243 unique variants alone,” Gollop says. “You most certainly will not encounter every possible variation of the Queen in the game.” 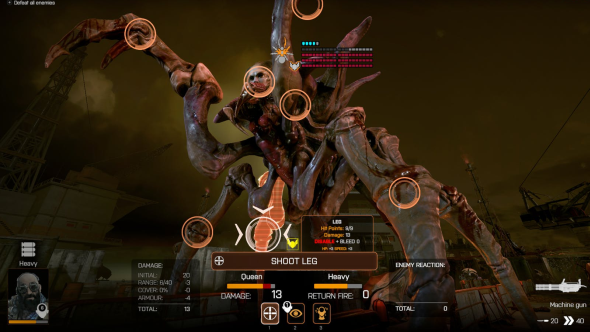 One of the mechanics that separates Phoenix Point from the tactical turn-based pack is the idea of persistence. “[The monsters] will try to preserve themselves,” Gollop says of the Crab Queen. “If the monster is taking losses, if her minions are being wiped out, she will retreat. If the monster escapes it will live to fight another day.” This means that you can encounter the same monster more than once.

But you don’t necessarily need to wait for the fight to come to you. “You have the option to locate her lair and send a squad in there to assassinate her and take out the lair altogether,” Gollop says. This benefits the havens in the area, which are hubs that you can defend and recover from alien attack.

These havens often offer rewards should you rescue them, and also introduce many of the NPC factions within the world of Phoenix Point. “Each of the main human factions in the game has their own technology and their own tech tree and they’re doing their own research and trying to build their own resources,” Gollop says of the havens. “Each of those factions has something very valuable. In fact, the most valuable thing they have is a potential solution to the alien threat.” In other words, it will behoove you to nurture your relationships with each faction as they fight off the alien menace.

When it comes to difficulty, Phoenix Point utilises a point-based system not unlike those found in tabletop miniatures games. “Every character in the game has a rating that we are calling ‘deployment points’ at the moment,” Gollop explains. These ratings are derived from every modular body part and mutation present on the character. Depending on the difficulty setting, the enemy squad will be allocated a certain number of deployment points. “If you’ve got some particularly powerful mutations deployed in the battle then there won’t be so many [enemies],” he continues, “but if they’re relatively low-cost there might be more of them.”

One final bit of information Gollop revealed is the ability for you to name the alien enemies in the game. He used the Crab-Man archetype as an example. “A Crab-Man’s default name might be ‘Mutation #1721 or something, But then you can rename it ‘Brawler’ or ‘Slicer’ or ‘Shooter’ or ‘Tank’ or whatever.” The hope is that this makes it easier for the you to identify which particular mutation you’re working against. But it also lends a small personal touch to each game that gives meaning to the identifiers.