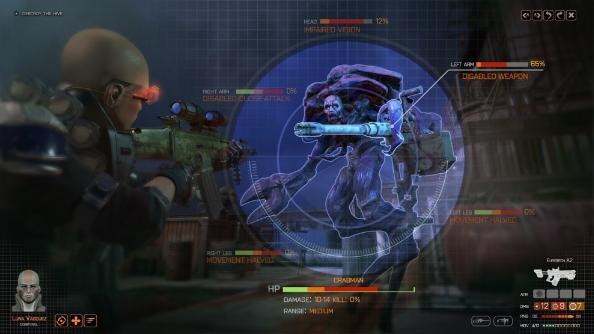 Julian Gollop is the father of XCOM. He created the alien-defence strategy game in the 90s with XCOM: UFO Defense, which went on to spawn a classic series and two games as part of a modern reboot. Now the creator returns to his creation, at least in some form, with Phoenix Point: a game that looks a lot like XCOM.

The brilliant XCOM 2 is one of the best strategy games on PC. Will Phoenix Point stand proudly among them one day?

Snapshot Games, Gollop’s new studio, have released the first image from Phoenix Point, which you can see above. It’s very, very reminiscent of the modern XCOM games, with what appears to be a zoomed-in focus on enemy targets, with health details and percentage chance-to-hit stats.

The game does appear to have a horror vibe to it, opposed to the more classical sci-fi seen in XCOM, and with the ability to target specific limbs perhaps tactical dismemberment may be an element of Phoenix Point. Enemies will reportedly mutate to counter your tactics.

“Phoenix Point is an XCOM style of game with the modern presentation and tactical mechanics of the Firaxis reboot with an open world, strategic level reminiscent of the original X-COM,” said Gollop in a statement.

Snapshot Games will be present at E3 to show Pheonix Point off to the world, so hopefully we’ll be seeing more than just this single screenshot very soon.