Playing the XCOM-alike Phoenix Point, I’m reminded of that other timeless tale of planetary defence, Men in Black. Specifically the Noisy Cricket – a tiny, chrome gun with a big punchline when fired: a huge explosion and enough recoil to plant Will Smith’s rear in a nearby windscreen.

There was a similarly-sized gun, sat innocuously in the UI for half of my first session with Phoenix Point, that I completely overlooked – until I found that a little rocket icon appeared on-screen when it was equipped. I learned if I clicked on the rocket icon and then on a section of ground near the crab-like creatures that are Phoenix Point’s enemies, half the screen would detonate – yielding a flurry of permanent status effects as the crabs lost the use of their claws, legs, and various other faculties.

Phoenix Point is full of buried surprises like these. And they’re surprising in part because, on the surface, this game looks terribly familiar. XCOM: Enemy Unknown borrowed a premise, a name, and plenty of mechanics from designer Julian Gollop’s 1994 original; in turn, he has sensibly layered the presentation of Firaxis’ reboot over his new take on the formula. Phoenix Point wears the unmistakable cowl of new XCOM: the shield icons that indicate cover on the map; the concentric grids that show how far you can move, and where you can shoot from; the cinematic camera that takes over once the energy beams start spewing.

But that approachable shell belies the more granular, complicated beast beneath. Your movement range reflects a pool of action points, which can be spent any number of other ways – checking your inventory, picking up weapons, or handing ammo to fellow squaddies. The target drawn on your enemies before taking a shot, meanwhile, is merely a suggestion: click and drag and you’ll discover you can choose to fire in any direction at all. This manual aim can be used to take out specific limbs in a VATS-like system, or tear through portions of the terrain to better get at the crabfolk.

I’ve been having huge amounts of fun with both of those aiming options, but especially the latter. It’s uniquely satisfying to demolish a corrugated iron shed and the crabman taking cover behind it, having lined up the shot just so. More than any PC shooter, those moments remind me of leaning into the static grass during a Warhammer skirmish, craning my head in order to work out if I can get away with a particularly audacious attack. 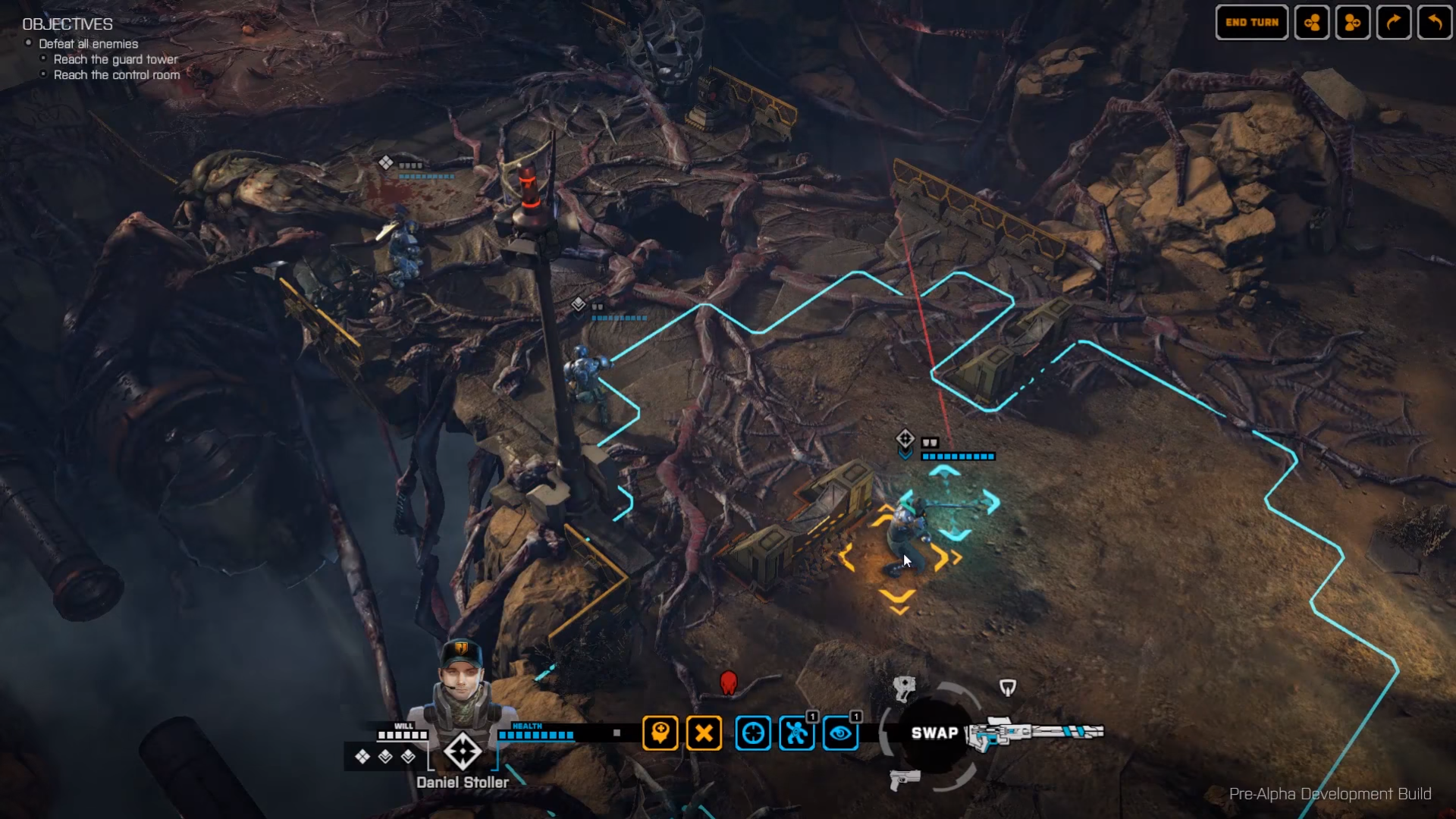 There’s more than a touch of the tabletop in all of Gollop’s games, and the roll of unseen dice shape the moment-to-moment action of Phoenix Point – though you wouldn’t necessarily know it at first blush. When preparing to shoot, the game gives you a breakdown of how many hit points you’re likely to shave off your target. A first set of flashing squares indicates probable damage, while a second, larger set indicates the improbable – the total you’ll hit if you’re really lucky. Yet not even the base damage suggested by the UI is guaranteed, but subject to other, less visible variables. It’s simply not Gollop without the gamble.

A skull flares up on-screen when you’re firing on an enemy at risk of imminent death – and you might think those shots, at least, are safe to take. But in fact, a read of Phoenix Point’s game guide reveals that there’s a degree of granularity here too – the faster the skull flashes, the more likely your shot is to result in an instant kill.

My worry is that the simplicity of Phoenix Point’s presentation actually hides the nuances of a more complex game. My hope, however, is that Snapshot Games will make at least some of those nuances far clearer before its full release towards the end of the year. 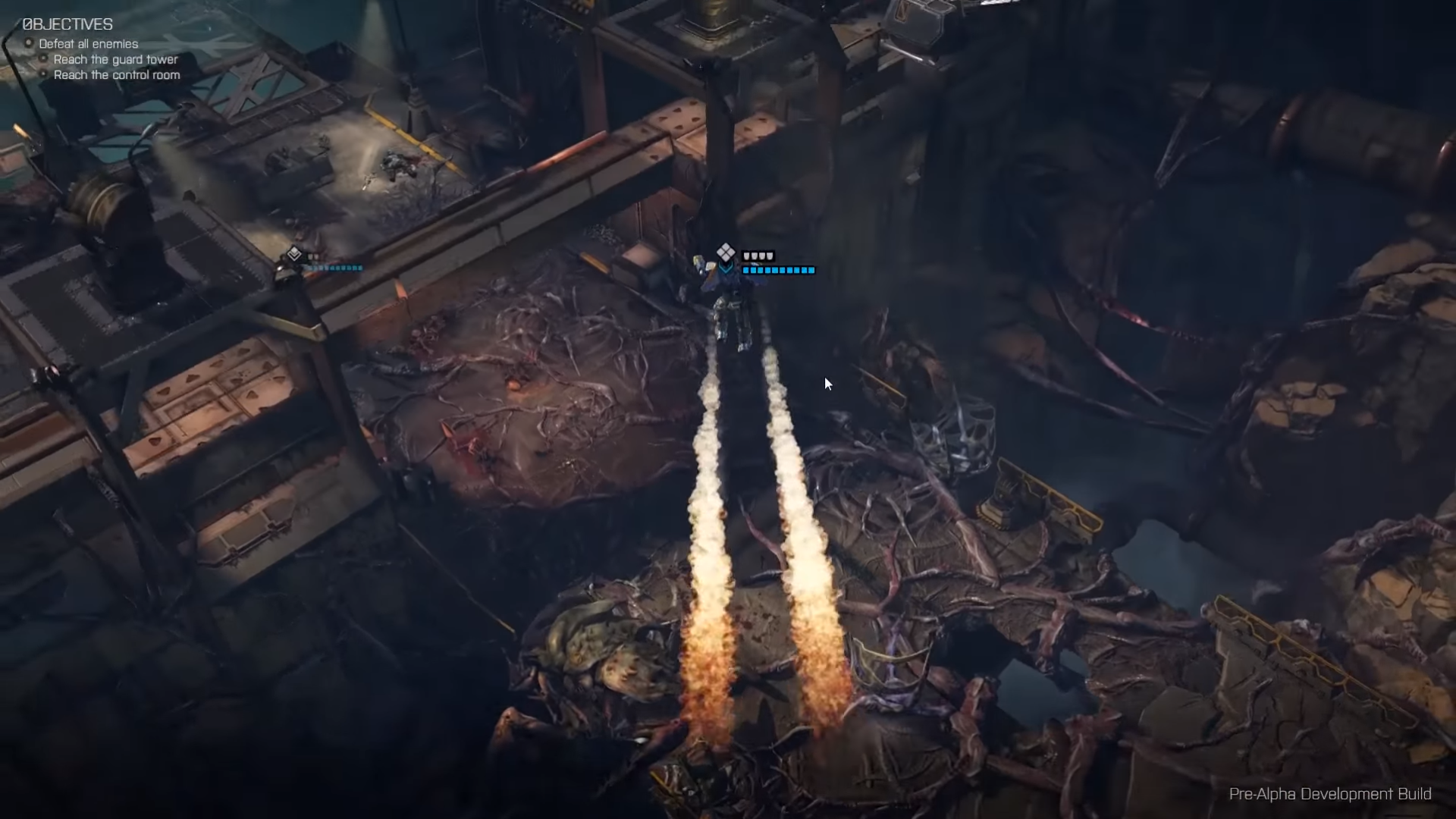 Perhaps, if all of Phoenix Point’s many variables were elucidated on-screen at all times, it would appear an unbearable mess and we’d never stick with it long enough to understand its less obvious quirks. Still: right now those factors can lead to frustrating mistakes in the first hours of play.

The good news is that this is an accomplished tactics game with a distinct, murky character: murky in both its rules and its soggy encounters in the mists. Any early concerns that Phoenix Point is too similar to XCOM – that Gollop had wound up mimicking his own mimics – dissolve as its surprise elements emerge from the shadows. Rather like the crabman you failed to spot before using up all of your action points.