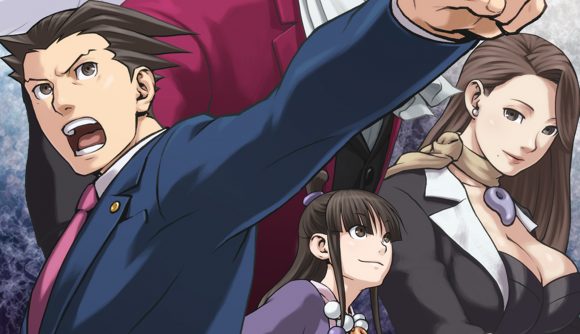 I like to think that the adventures of Phoenix Wright in the Ace Attorney series made a splash worldwide because of the way they blended the lengthy narratives of Japanese visual novels with the more traditionally game-like puzzle solving of an old-school adventure game. With that in mind, it’s appropriate that Mr. Wright is finally making his case on the home of the point-and-click adventure, and now we know exactly when.

Ace Attorney Trilogy hits PC via Steam on April 9 (as well as the current consoles). This three game package includes Phoenix Wright: Ace Attorney, Justice for All, and Trials and Tribulations. If you played any of the originals, the cases will be pretty much as you remember them – just with some higher resolution art to aid the jump to larger screens.

If you haven’t played them before, the Ace Attorney games put you in the shoes of defense attorney Phoenix Wright. As you try to clear your clients’ respective names, you investigate crime scenes and interact with goofball witnesses, then you bring evidence to court and try to poke holes in false testimonies.

The legal system depicted in Ace Attorney bears little resemblance to any real-world analogue, and we should probably be thankful for that – except for the part where it’s really fun to shout “objection” like Wright does in the game.

Read more: Point and click on the best adventure games on PC

Steam’s video selection still currently hosts the Ace Attorney anime – which is not great, for the record – so the trilogy is technically not the only way to get Phoenix Wright on a PC game distribution platform. Whether the show stays up after Valve’s plan to purge non-game related content from the store remains to be seen.