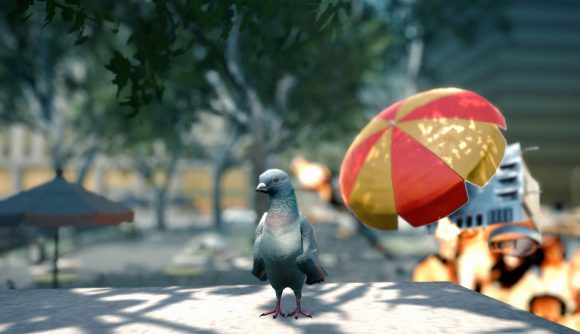 If you thought the days of goofball ‘simulators’ were behind us, Bossa Studios – the developer behind Surgeon Simulator and I am Bread – is, er, dropping a surprise on you. The studio is now at work on Pigeon Simulator, which will allow you to live out your dreams of getting in the way of pedestrians, flying into windows, and pooping on people.

This comes after Bossa’s Kevin ‘KevKev’ Suckert posted a video of a work-in-progress prototype for the game to social media. It hit r/gaming with 129,000 upvotes, and garnered over three million views courtesy of the gaming memes Twitter account, which was enough to suggest there was enough interest in the concept to turn it into a full game.

We’ve got a somewhat more official trailer now, showcasing the city of Barnardshire, your ability to fling targeted feces, and how you can turn humans into ragdolls by just smacking them into a skateboard. Also, there are bread hats and explosions. You know, pigeon stuff.

There aren’t many details on what Pigeon Simulator will look like in its final form, but Bossa says further news will be “hatching soon.”

In the meantime, you can check out the fecal action above.

While we await news of Pigeon Simulator, we can at least rest assured that Untitled Goose Game will not be our only opportunity to be a mischievous bird in the future.