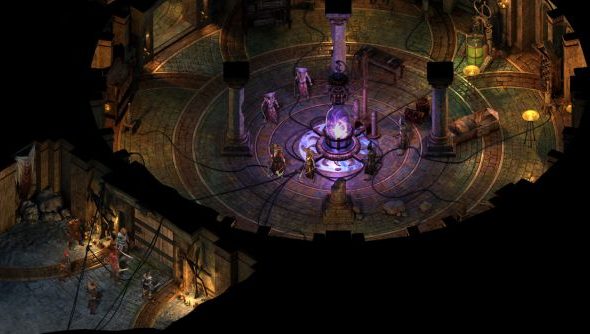 Kickstarter funded Wasteland 2 and Torment: Tides of Numenera from InXile, and Pillars of Eternity and its expansion pack from Obsidian – essentially plotting out the second Infinity Engine Age in advance.

For Obsidian, the hope is that initial kick will be enough to see them through Eternity’s sequel, too.

“That’s the dream of any independent developer,” said project director Josh Sawyer. “That they get the cash reserves that they don’t need to ask anybody for money.”

“What I would like, and this is true of any independent developer, is for this title and the expansion to be successful enough that we don’t have to go back to Kickstarter to make the sequel,” Sawyer told PCGamesN.

Project Eternity’s campaign in October, 2012 raised $3,986,929 in a month – more than tripling the developers’ initial goal.

“That was rapido,” recalled Sawyer. “The rate that the campaign took off, we did not expect it. At all. We had to come up with where we wanted to take it very, very quickly.

“We had two or three stretch goals planned. We launched it on a Friday and we had to come in on the Saturday and discuss how we were going to approach it.”

While “very rewarding”, Sawyer said it was “hard to describe” just how gruelling the Kickstarter process is.

“That process is something I could never look forward to but the overall result of it can be very effective. I wouldn’t shy away from using it in the future if I thought here’s an idea for a game that a publisher’s not going to touch.”

Obsidian wouldn’t rule out returning to Kickstarter with another, new idea unrelated to Eternity.

“If we wanted to make a brand new game that’s very different that, again, is something a publisher isn’t super jazzed about but individual backers would be, then, we’d probably go back to Kickstarter,” said Sawyer.

Would you help fund another Obsidian game? A Beta Protocol, perhaps?