Pillars of Eternity II transports you to the Deadfire Archipelago which you will quickly find out provides a very different experience to your last trip into Obsidian’s fantasy universe. The first game stuck closely to established Tolkienesque archetypes, with rolling meadows, crumbling fortresses, and murky forests, but Pillars II replaces that entirely with a Polynesian-like island landscape. The result is a game that leans into fantasies of the golden age of pirating more than your classic D&D adventure, and that’s something to be excited about.

Welcome to the Deadfire Archipelago

A collection of hundreds of small volcanic islands on the edge of the Known World, the Deadfire Archipelago is one of the major areas of Eora. It is many thousands of miles long, stretching across the entire length of the southern hemisphere. Not only does this make it a colossal, important region, but the many climate zones produce a variety of beautiful and different biomes: perfect for an RPG adventure.

Where Pillars 1 had a European feel to its landscapes, the Deadfire more closely resembles the southern Pacific island chains of Asia. Expect to see many different forms of foliage, fauna, and architecture, with little that would blend in on the set of The Lord of the Rings.

The aumaua, one of Pillars’ playable races, are indigenous to the region, and make up the many Huana tribes that populate the islands. But while they may be the indigenous peoples, the aumaua are not the only race to call the Deadfire home.

A world of greed and corporations 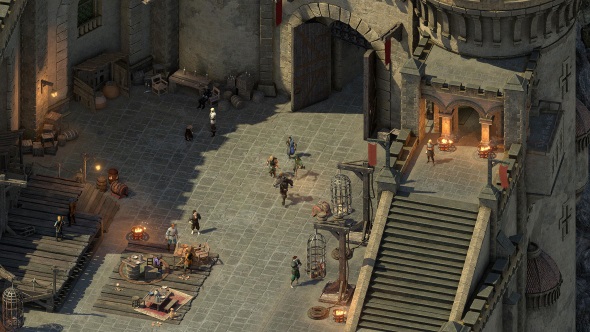 During the century leading up to Pillars of Eternity II, the Deadfire has been a hotly contested war zone for various factions and peoples. Colonial traders and explorers have begun to claw their way into the islands, hoping to exploit its resources and claim its secrets. Such activity has, naturally, led to rampant piracy among the seas that link the Archipelago’s islands.

The colonisation of the Deadfire is almost solely due to the islands being the only known source of luminous adra. While a variant of the resource can be found in Dyrwood, the luminous version of adra found among the rocks of the Archipelago hold far more soul energy. It’s no surprise, then, that a variety of races and trading companies are hoping to strike it rich at the expense of the Huana’s home. Expect to bump into humans, the dwarves of Vailia, and aumaua from Rauatai, among many others. 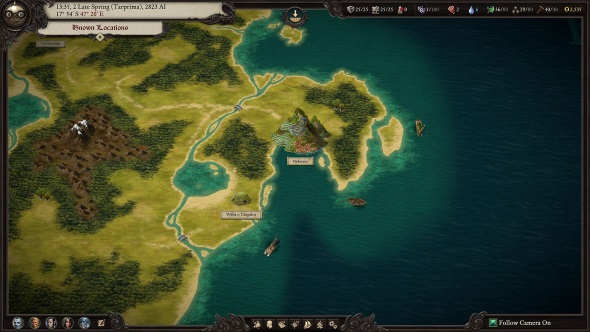 Colonisation typically means the uneasy cooperation of various vying factions, and the Deadfire is no exception. The centralised point for the occupation efforts is the region’s capital: Neketaka. This striking, vertiginous city envelopes a small island with its tentacle-like streets. Within those streets, the Vailian Trading Company and Royal Deadfire Company viciously compete for business, although a bargain struck by the Huana’s ruling Kahanga tribe prevent their rivalry from boiling over into all-out war. The locals also have their own agenda and attempt to exploit foreign interest in their lands for profit. If it weren’t already obvious, you should be wary on your travels around Neketaka.

If you’re looking for a more peaceful destination then you may wish to drop anchor at the Huana’s Naasitaq. A remote island in the south of the Deadfire, this snowy tundra presents the best example of coexistence in the region. Here, boreal dwarves share territory with aumaua, while caravan elves make camp on the shores. Naasitaq has become the largest and most stable nation in the Archipelago, although who knows how long that can last as new nations attempt to carve out their own place in the Deadfire.

While the islands are largely held tight within the possession of Huana tribes, the seas have been grasped by the Príncipi sen Patrena. These ‘Princes without a Homeland’ are a pirate confederation made up of legions of families, displaced from their homes in Grand Vailia when the area collapsed and left them with no land. Now their numbers include many Huana and other desperate individuals all looking to exploit, smuggle, and act as mercenaries for the highest bidder.

Explore the land and sea 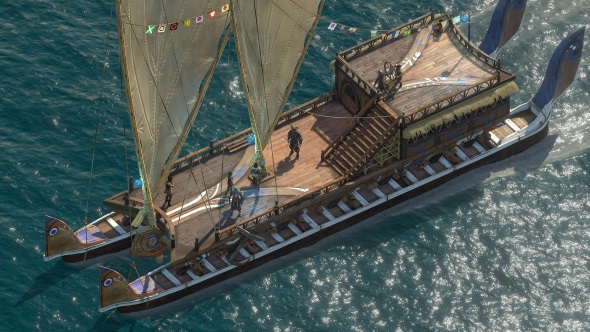 The Príncipi may make life difficult for everyone in the region but that shouldn’t stop you exploring the seas of the Archipelago. Pillars of Eternity II, like all great RPGs, places a great emphasis on curious travel, but this time both the lands and sea will be available for your perusal. The sea serves primarily as a network of paths to new islands, but that doesn’t mean that there’s not a myriad of experiences to be had amongst the waves.

Sailing the ocean will bring you within cannon-range of many foes, both pirate and naval, and you can engage in ship-to-ship combat. Succeed and you can relieve your enemy of their booty, and then use the ruins of their ship to aid in the repair of your own.

You may become a fearsome terror of the sea over the course of your adventure, but there’s more to be worried about than other ships and their captains. Below the waves, terrible sea monsters cut short many explorative excursions. Many ships now lie at the bottom of the ocean, torn apart by the whirlpools created by colossal leviathans, their crews left decimated by polpovir attacks.

Dangerous sea creatures aren’t enough to put you off, though – what self-respecting adventurer would run from the sight of a half-man, half-octopus beast? You can catch sight of one of these, alongside pirates, four-armed lizard beasts, and fallen gods, in Pillars of Eternity II: Deadfire, which releases May 8th on PC.