Pillars of Eternity is not a game designed explicitly to attract a wide audience. At a time when it sometimes seems like an undue imposition to unmute a Facebook video or expand a Tweet, Pillars makes you read long passages of descriptive text and written dialogue in order to digest its world and unlock its treasures.

Hungry for more spells and dragon-slaying? Seek out our list of the best PC RPGs.

It’s also very difficult, frequently and spiritedly cutting you and your party down for a) failing to pause and plan an imminent fight, b) failing to find the right balance of classes in your party, or c) failing to equip your perfectly-balanced party with suitable abilities and equipment.

And why does it make such reaching demands of its players? Why, to evoke and homage a cluster of isometric RPGs released between fifteen and twenty years ago, of course. Now – hands up who thinks that sounds like a game destined for an estimated Steam audience of over half a million players?

Obviously, Pillars found that audience. Not in spite of those idiosyncrasies, but because of them. Viewed through the gamer’s eyes it seems almost a no-brainer for veterans of Obsidian and Black Isle Studios to come together and launch a Kickstarter for a new Infinity Engine-inspired RPG. But if you’re the creator about to put your livelihood on the line, as Obsidian cofounder Josh Sawyer was in September 2012, you don’t take anything for granted. 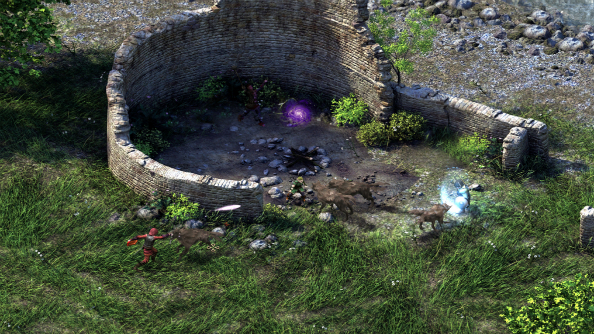 “Our original goal was $1.1 million, and we really weren’t sure if we were gonna make that goal,” he tells me. “We knew that there was an audience but we did not realise that it was as large or as passionate as it turned out to be.”

Project Eternity, as it was known early on in its Kickstarter campaign, hit that goal in just two days. In the month that followed, that figure rose to just short of $4 million, pledged by 73,986 backers. Despite narrowly missing its final stretch goal by $14K, the Pillars crowdfunding effort could only be considered a success story. However, as Sawyer explains, developing a game amidst such moving goalposts posed a formidable challenge.

“The Kickstarter campaign was very gruelling, which is a common theme other people who have been through the [same] process have reported. It sounds like a silly complaint: ‘Oh god, it was so successful, we had to keep working so hard at it.’ But we had preliminarily discussed [a budgeting plan] and we really didn’t think we’d have to move on that for a few weeks. So when the money started coming in, we realised ‘Oh crap, we really have to move quickly with this.’ We launched on a Friday, and the next day we were in the office at 8AM on a Saturday going, like, ‘Oh crap, we have to figure this out right now.’”

In many cases, Sawyer says, the team were using their best guesses to assess how much certain elements of their game would cost. “For example, we had our two big city goals. It was like, does it cost five hundred thousand dollars to make a huge city? It seems like maybe it’s more. Does it cost a hundred thousand dollars to make a Linux version or a Mac version? I don’t know.” 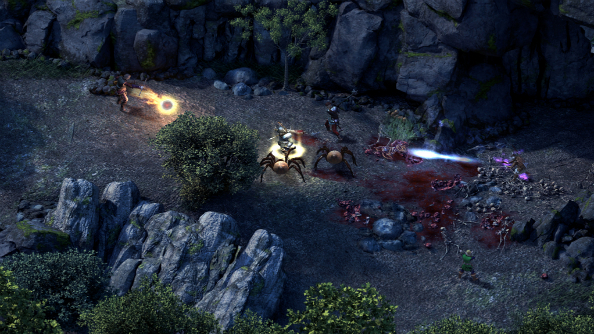 With backers continuing to tick off the project’s stretch goals, the team had to decide where to allocate their time and money quickly, and commit to those decisions. Ultimately, Sawyer concedes, it led to certain features such as the player’s upgradable estate, Stronghold, “not quite getting as much attention as it should have.” With the game garnering a Metascore of 89 at launch, though, and many of the rough edges subsequently ironed out in post-release updates, Sawyer is in a position to reflect on any mistakes without too much chagrin.

Among Pillars of Eternity’s stretch goals was an expansion called The White March, the first part of which was released recently. While the base game draws much inspiration from the Baldur’s Gate series, often described as a spiritual sequel, The White March finds inspiration from the sub-zero climes of another Black Isle RPG family: Icewind Dale.

“It’s not really that big of a departure,” says Sawyer, “but in the base game we very much made something that was very cosy, very Dalelands, very temperate. Meadows and forests and things like that.” The White March is a chance to put the player in a more perilous environment, then, while servicing the Pillars community with yet more Infinity Engine nostalgia.

But while the expansion is obviously a conscious effort to summon something old, the question of Pillars being a spiritual sequel to Baldur’s Gate is less straightforward. There’s the matter of the actual Baldur’s Gate threequel (aka Project Jefferson), announced back in 2002 by Black Isle and publisher Interplay, and cancelled in 2003. 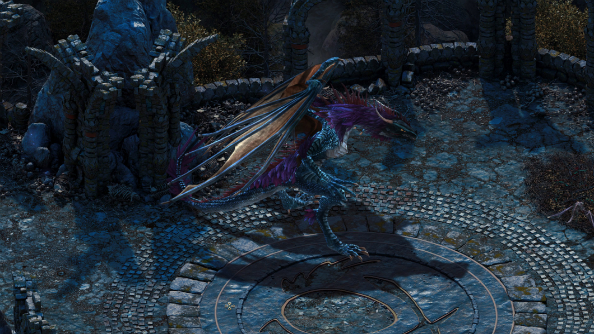 Add to that the further complication that Black Isle themselves never intended that game to be a Baldur’s Gate title. Rather, Interplay were contractually obliged for any RPG they put out to carry either the Baldur’s Gate or Icewind Dale name. With such a convoluted history colouring the BG lineage, how closely is Pillars related to those games? I put the question to Sawyer.

“There are some mechanical things that we carried over. The reputation system that tracks different personality types and has people react differently to the certain personality that you gave your character, that was something that we initially conceived for Jefferson.

“And there might be a few elements here and there – obviously the name of the inn in the first town being The Black Hound is not a coincidence. But the story is very different from what we were doing with Baldur’s Gate III. And really none of the characters came over. It was its own thing, although obviously we tried to evoke the feeling of the Forgotten Realms, and the Dalelands, specifically.”

Pillars of Eternity clearly isn’t a paint-by-numbers recreation of Black Isle’s RPGs, but all the same it did require a return to old working practices in some areas. For the first time in over a decade, Obsidian had to get used to working on 2D maps again. Some younger developers had never worked on an isometric game, Sawyer tells me, and others were suddenly using techniques they hadn’t practiced for years. 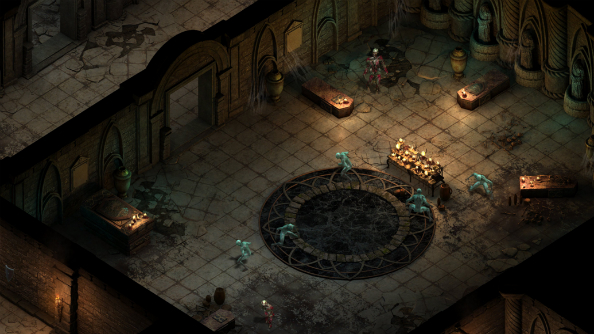 “We had to go over best practices for how to lay out levels, how to space things out, how to look at level flow in a way that you wouldn’t necessarily need to if you had a rotating camera or if you just had a real 3D camera.”

One of the early stumbling blocks was a particular optical illusion created by the isometric camera, where all perspective is flattened. “So you have a big tall cliff you can walk up to the top of, but the place where the cliff’s overlapping in the background, is actually hundreds of feet up screen from it. If you can stand next to it, what winds up happening is that you have people who are actually separated by hundreds of feet but they look like they’re standing right next to each other. So early on people were doing that, and I’m like, ‘Dude, doesn’t this look insane?’” [Laughs]

Obsidian also had to get back into the habit of writing a lot of prose. “That’s not something we’ve had to do in dialogue for a while, writing in descriptive texts about how characters are emoting and things like that.”

Perhaps due to the fact that it had been so long since they’d worked in this way, Obsidian had to re-learn some of the lessons they’d once learned as Black Isle developers. Specifically, says Sawyer, when it comes to starting a voiced line and written text entry differently, but presenting them simultaneously. 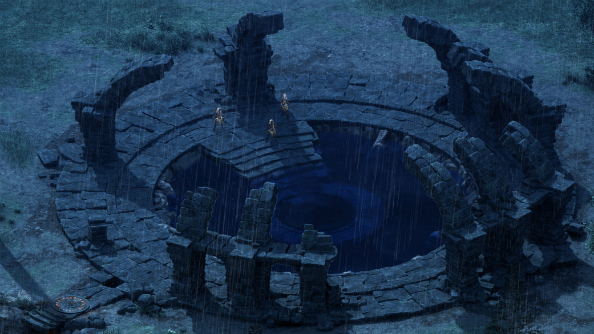 “[The player is] reading prose, but the voiced line that’s speaking the dialogue starts after the prose. So, for example, the description says, ‘Pallegina blinks and shakes her head’ and then she says something. But you hear the line come in as you’re reading ‘Pallegina blinks…’ It’s disorienting… We made mistakes in certain cases that went into the final game.”

What Sawyer, a developer with credits on many of role-playing’s seminal titles, might deem mistakes, gamers might see as endearing anachronisms. It’s easy to deify the games Pillars evokes, because to many they represent the carefree days of youth – a time when you could devote an entire school holiday to braining kobolds without a moment’s guilt. But it’s also important to remember that they weren’t perfect.

Similarly, while Planescape: Torment, Baldur’s Gate, and Icewind Dale are now widely regarded as classics, it’s interesting to hear that at the time they were being developed, Sawyer and his Black Isle colleagues were simply throwing ideas around, with no over-arching feeling that they were working on all-time greats.

“I started in ’99, right in the middle of Planescape: Torment’s development,” says Sawyer. “And I think at that period of time, there were a ton of designers working at that studio who were junior. For example, Icewind Dale was made almost entirely by juniors. Most of the designers were juniors, the programmers were juniors, the artists were neither new or juniors. We had no leads. [laughs]. That’s kind of crazy. Icewind Dale actually had no leads on the team at all.” 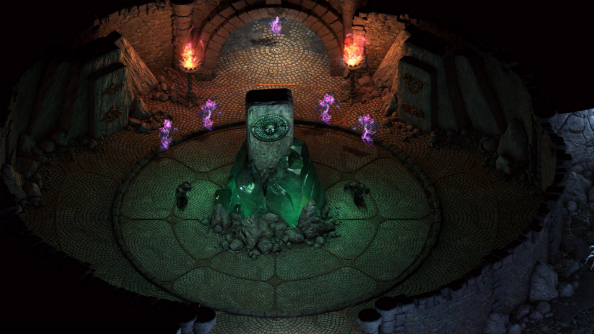 “I think we were all just very focused on making things that we thought were really cool. And I think the Torment team – and I’m speaking as an outsider because I just did web development – their focus seemed to be on just making the coolest stuff that they could.

“We were all working so much – I went to work every day of the week, I didn’t know what to do when I wasn’t at work, which was kind of unhealthy. But I think that a lot of us had… I don’t even want to say it was a work ethic, it was just a desire to be there making cool stuff and seeing it in the game.