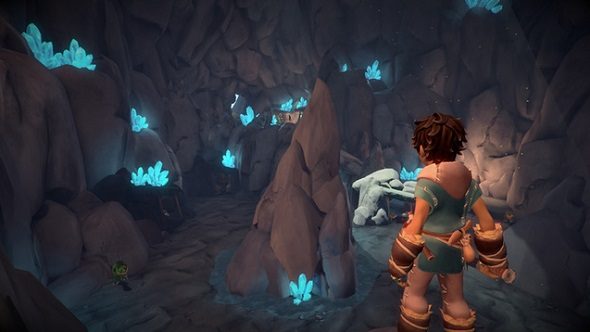 In most action games, humans are still very much at the top of the food chain. While monsters or beasts certainly seem more vicious and larger than your average person, human ingenuity and skill means that man is still the apex predator. Twirlbound are trying to change that in Pine, a charming action adventure game where humans never reached the top of the food chain.

For more indie game goodness, check out some of the PC’s best indie titles.

Tasking you as the young adult Hue, Pine is set on the island of Albamere, where only a few human tribes still remain. The rest of the island is ruled by humanoid animals, like mammoths and moose that can stand on two legs. Humans are still subservient to their animal superiors, having to give them tribute to ensure their safety. It is up to Hue to get over his fear of the outside world, fight for the survival of his tribe and eventually leave the island in search of a new home.

From first glance, Fable is the game that springs to mind when looking at Pine. Both are set in whimsical fantasy worlds where you start off as a small boy, who must go on an adventure to grow as a person. The other major comparison to Fable is how the island of Albamere reacts to player action or inaction. Don’t worry, there are no promises of an acorn sprouting into a full oak tree, but Albamere’s environment will change regardless of Hue’s actions. Much like a real ecosystem, species will thrive and wither without player involvement, making the island of Albamere feel like an actual place rather than an obvious game world. Tribes will migrate based on the weather and you may find nearby species may move position, if there has been a great rain or if there’s a storm on the horizon. Players are very much at the mercy of the environment, rather than the other way around.

The weapons you’ll be using in Hue are suitably primitive, with Hue and the surrounding tribes fighting with spears, bows and hide shields, rather than with medieval swords and suits of armour. According to developer Twirlbound, enemies will adapt to Hue’s usual tactics by using different attacks or even physically evolving to counter a strategy. It sounds a prehistoric Metal Gear Solid V, with giant moosemen equipping new weapons to counter this young man hunting in the grass.

For all of its ambition, Pine is not that far along in development with Twirlbound just putting the game on Steam Greenlight and planning a Kickstarter to launch on March 9. Much like the original Fable, I do hope that the Pine team don’t promise on features that their small team can’t possibly deliver, as this adventure I imagine many would like to go on. If successfully funded, Pine is initially scheduled for launch in Q4 of 2018.