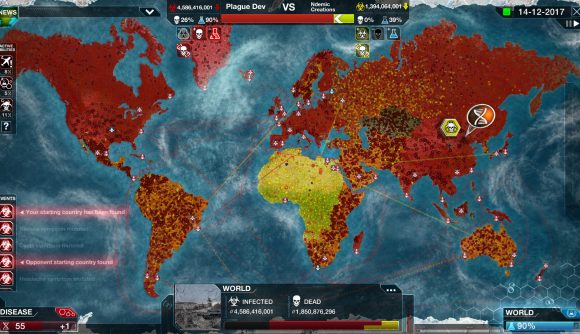 It’s a strange time to be Ndemic Creations, the developer behind Plague Inc. The studio has gone on the record to say Plague Inc. is “not a scientific model” as players flocked to the game in the wake of the current coronavirus outbreak. Now, Ndemic is working on a brand new mode for Plague Inc. that allows players to switch roles: instead of creating a killer plague, your job will be to stop one.

The new mode comes alongside Ndemic’s donation of $250,000 USD (£200,700) to help fight the COVID-19 epidemic around the world. The studio split its donation between the Coalition of Epidemic Preparedness Innovations (CEPI) and the World Health Organisation’s COVID-19 Solidarity Response Fund.

“Eight years ago, I never imagined the real world would come to resemble a game of Plague Inc., or that so many players would be using Plague Inc. to help them get through an actual pandemic,” said Plague Inc. creator James Vaughan. “We are proud to be able to help support the vital work of the WHO and CEPI as they work towards finding a vaccine for COVID-19.”

Ndemic says that while the studio was arranging its donations, it routinely fielded questions about a new game mode that let players fight back against an epidemic. As a result, the developers decided to ramp up production on the new mode, and it’ll be free to Plague Inc. players during the course of the coronavirus outbreak.

The new mode will involve the same kinds of decisions governments are making in response to the outbreak now: managing its spread, ramping up healthcare facilities and staff, and making decisions about triage and quarantine. You’ll also be able to put policies like social distancing into effect to see how they impact the disease’s proliferation.

It’s unclear whether the new mode will be available for all versions of Plague Inc., including Plague Inc. Evolved on PC, or only for the original mobile version. Ndemic says it will provide more information as soon as possible. In the meantime, the studio says, “look after yourselves, your families, and everyone else.”

Other software developers have sprung into action in the face of the outbreak as well. Check out how the games industry is fighting back against the coronavirus crisis.