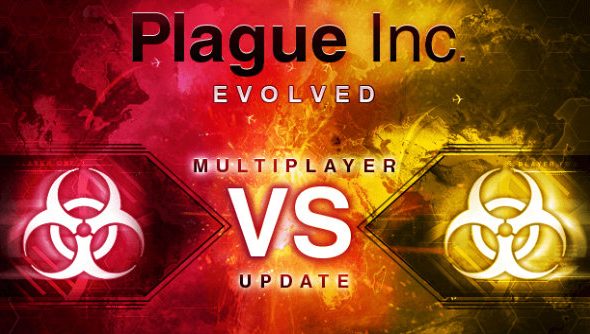 Plague Inc. might sound like a rap posse, but it’s actually a game about spreading diseases and wiping out humanity. What’s the best thing about disease? It’s easily shareable. That’s why it makes all of the sense that you’ll soon be able to play it against a friend.

Not feeling competitive? Here are the best co-op games on PC.

That’s right, you and your friends will be able to face off to find out who’s the best at being a blight on the Earth. Finally you’ll know.

“In VS. mode – the world is unlucky enough to be infected by two deadly plagues who are battling for control of the world,” developer Ndemic Creations writes on Steam. “Whoever infects the world first wins but they must also avoid being cured by humanity or prematurely eradicated by the other plague!

“There are many ways to become the ultimate plague. Will you spread slowly, stay under the radar and let humanity and your enemy battle it out, or be aggressive, fight the cure and use total organ failure to gather huge amounts of DNA? Or maybe you should focus all your efforts hunting down the other plague in order to wipe it out before it can spread at all. The genetic strategies are endless!”

To make things more interesting, players get access to new evolutions, abilities and genes to manipulate and outwit the competition.

More details can be found over on Steam.