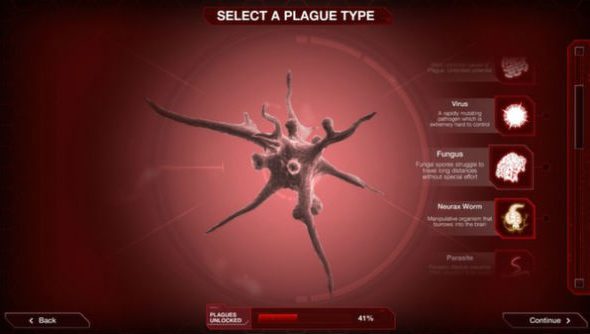 After two years of lab, ahem, Steam Early Access testing, Plague Inc: Evolved has released its version 1.0. Evolution 18, the latest update, is also live and introduces multiplayer co-op to the far-reaching confines of its virtual laboratories.

The best co-op games on PC are best enjoyed with friends.

In its full release state, Plague Inc: Evolved promises ten different disease types across 20 different scenarios that range from simple bacteria, more sophisticated bio-weapons, and even mind-controlled zombies. Competitive multiplayer sees you go up against another plague as you battle it out in a race to defeat humanity. Charming.

Evolution 18 introduces the game’s long-awaited co-operative mode, which we’re told is a “fully-formed expansion”, that essentially flips the above on its head and sees you and a pal using two different diseases in unison.

“It all begins with Patient Zero as you and your partner select where to start your plagues – will you choose to start on opposite sides of the world, with one player evolving a heat-resistant plague and the other aiming to wipe out wealthy countries?” asks the co-op Steam Community update. “Or will you stay close together in an attempt to minimise the chances of being spotted too soon?

“The disease traits have been fully redesigned and there are a whole host of new Active Abilities to use to help your disease along, such as Unscheduled Flight, and location-specific Infection and Lethality Boosts. Will you help your partner avoid the cure – even if it weakens you? Can you resist the temptation to steal some of their infectivity for yourself?”

Looking to the future – if we can hope for such a thing – developers Ndemic Creations say that “new modes, cheats, scenarios and official disease types are in development.”