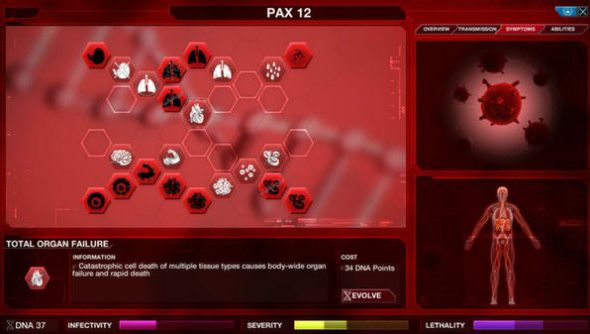 After almost two years in Early Access, Plague Inc: Evolved will release in full on February 18 alongside its final update. Update 18 (or ‘Evolution’ 18, as it’s known) will introduce Co-Op Mode that promises to bring an “entirely new dimension” to the game.

Playing with mates is fun – here’s our take on the best co-op games on PC.

Evolution 18 will bring Plague Inc: Evolved to version 1.0 and Co-Op Mode will let players take on the role of two different diseases. Working in concert, you’ll be tasked with infecting and ultimately destroying the world as team. All in day’s work.

In the two years Plague Inc: Evolved has been left to mutate in the petri dish that is Early Access, almost 10,000 user-generated scenarios have been formulated, three new major disease types have been discovered, and 40 quadrillion people have apparently been infected by players – “40,224,866,097,135,818 and rising to be exact,” according to developers Ndemic Creations.

“When we first announced the game’s release in Early Access, we had a clear list of features that we intended to bring to the game and I’m proud to say that we’ve achieved all of them (along with lots of other cool things that were requested by players!),” reads a statement from Ndemic. “Early Access has made the game stronger than we could ever have imagined, thanks to the invaluable community support we’ve received.

“From the wealth of incredible custom scenarios that have been made, to everyone that helped us populate our city-cams; our multiplayer beta testers, and everybody that’s ever requested a feature or reported a bug, we couldn’t have done it without you!”