The haunted house is an iconic attraction in theme parks. It has a fundamental place alongside the freefallers, ferris wheels, pirate ships, fun slides, and, of course, roller coasters. The Planet Coaster community has created many haunted houses in the past, and developer Frontier has even held competitions to find the creepiest and the freakiest of them. But now, Frontier has taken the hauntings to new heights: your park can now sprawl with ghosts in the official Ghostbusters DLC.

Frontier has collaborated with Sony Pictures to bring spooky new content from the original 1984 Ghostbusters movie into Planet Coaster. The DLC will feature items, characters, music, and ghoulies directly from the movie. The expansion adds a new area, new features, and a story campaign to the base game. That new area is a Ghostbusters-themed film set, complete with such iconic locations as the fire house where the team makes its headquarters and 55 Central Park West, also known as Spook Central.

The story scenario sees players struggling with their potentially possessed theme park, and the Ghostbusters arriving to save the day. All four Ghostbusters feature in the story, with the spotlight on Raymon ‘Ray’ Stantz who is voiced by his original actor, comedy legend Dan Aykroyd. With the Ghostbusters’ help, you must investigate the paranormal activity in your park and save your guests from spirits, spectres, and spooks.

The story has five chapters, each with different stages, and each stage has missions to complete. As you progress, Ray will give you objectives and optional challenges that will grant your park bonuses when completed. 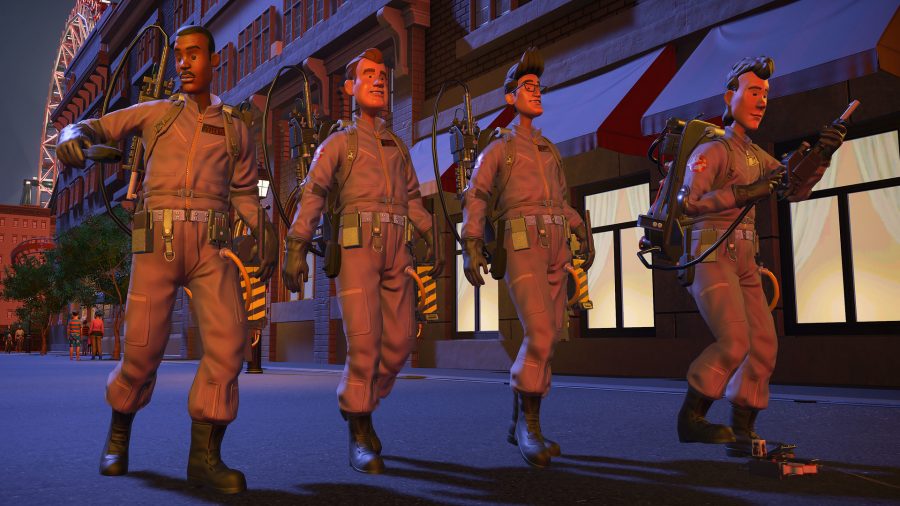 Alongside the campaign, Frontier has also included a new type of attraction inspired by the Ghostbusters franchise – theme park fans may know it as an interactive shooting ‘dark ride’.

It plays out similarly to Buzz Lightyear’s Laser B in Disneyland, or Men in Black: Alien Attack at Universal Studios Florida. A car whisks your guests along a track while they are assailed by enemies, only they have a gun (usually a laser gun) with which to defend themselves. Guests can score points by ‘killing’ enemies.

In Frontier’s Ghostbusters ride, the track takes guests through the events of the film, hunting down ghosts with their own proton packs. But, as with other attractions in Planet Coaster, you can customise the ride to create your own vision: you can change the targets, the scores, how the combo system works, and adjust the timing of the ghosts. 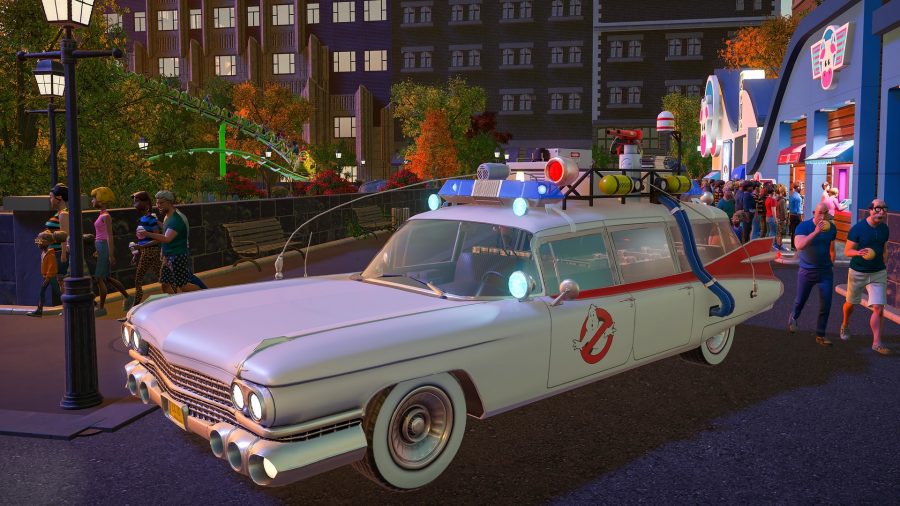 Of course, the Ghostbusters wouldn’t be able to respond to paranormal emergencies without the Ecto-1, and in Planet Coaster’s content pack Ray hands you the keys to the gang’s trusted automobile. Similarly to the jeep in Jurassic World: Evolution, you can drive around your park in the Ecto-1, with sirens flashing and the Ghostbusters’ brilliant theme blasting through the radio as you burn rubber. Using the terrain tool, you can even create courses and race tracks throughout your park.

Read more: Check out the best management games on PC

With the Ghostbusters expansion, it’s interesting to see Frontier’s sim reflect the real-life trend of theme parks embracing entertainment franchises in many of their zones. Star Wars Land has just opened at Disneyland in the last few days, while the Wizarding World of Harry Potter at Universal Studios, and the new Studio Ghibli theme park opening in Japan, are just two more of many examples in modern theme parks.

Let’s hope that more fun film-related content will make its way to Planet Coaster and until then, look forward to the exciting creations that Planet Coaster’s imaginative community will surely produce with these new tools.