You know those dreams where you’re giving a speech to your whole school in just your underpants… and then your teeth fall out… and then you’re being chased by a giant Daffy Duck (just me?)? This is the journalistic equivalent of that.

I’ve just been given a blank canvas and half an hour with which to design the theme park of my dreams in Planet Coaster, the latest theme park sim from Rollercoaster Tycoon 3 and Elite: Dangerous devs Frontier. That would be fine – wonderful, even – if it wasn’t for the game’s producer, Rich Newbold, sitting right next to me, and the fact that all my architectural ineptitudes are being recorded for the whole internet to see. [Ed: Yep, right below this, in fact. Everyone point and laugh…]

Thankfully, Rich is nice enough to tell me that he hasn’t got much of an eye for theme park design himself, meaning that we both blithely stumble through the hands-on together. In addition, the more advanced tools like the robust, voxel-based terraforming (more on that later) and the custom rollercoasters aren’t available to me, meaning I don’t get the chance to get too bespoke and Frankensteinian with my creation.

Traffic management of people plays a big part in Planet Coaster (or people-trafficking, as I inappropriately quipped to the game’s creative director Jonny Watts), so I decide to start things with a towering ride called the Sun Flare, piercing into the sky right in the middle of the park, off of which paths will lead to other sections of my park. Leading up to the Sun Flare, there’s a wide grand parade flanked by giant mechanical monsters, fountains and, errr, trees-on-top-of-trees (the result of my botched attempt at making a woodland area). 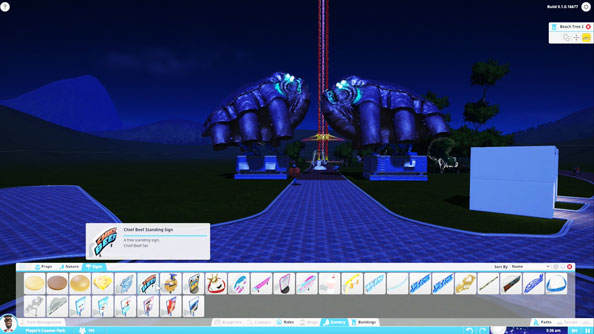 While I’m told that trees-on-top-of-trees probably won’t exist as an option when the full game comes out (and the rapid copy-pasting of trees to make woods probably will), players will still have the freedom to build gravity-defying structures. “We want to keep in things like floating rocks, and landscapes that you can raise and cut off underneath to create things a bit like in The Avatar”, says Rich, referring presumably to the Floating Mountains in the movie – huge slabs of rock that manage to stay suspended in the air for reasons I’ve now forgotten.

But back to my Sun Flare tower. It’s magnificent, a menacing marvel that people can see and flock to from miles away… only to then be disappointed to find that it’s the only ride in the park, there are no toilets, and the closest thing resembling food is Chief Beef – a mascot dressed as a beefburger in police uniform who I don’t recall employing. Still, maybe he’ll keep guests’ morale up in these dark early days for my Wonderland…

I plonk down the first toilet in the park right next to the exit from the Sun Flare, just in case the ride makes people queasy. The modular nature of the building means that you can essentially have ‘grounds’ around the toilets, build a wall to frame them, and embellish them with decorations and signs. You can also have several contiguous toilets next to each other in a cube formation facing outwards, or even build a tower of toilets, though at this point I can’t yet build stairs (or a ladder) going up to them. 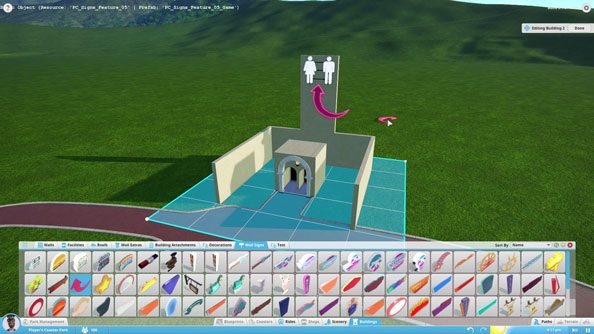 As I play Planet Coaster, and something sort-of resembling a theme park starts materialising, I start seeing elements of what Watts describes as a “deep simulation”. Every building and landscape-shaping tool has a range of keyboard modifiers (think Photoshop), which let you tweak and fine-tunes the functions of that tool. These tools are pretty much wasted in my amateur hands, so Rich takes over to show me something sculpted by one of the game’s artists.

Rich loads up a park with a huge tree-like structure in the middle, with giant fairy lights tastefully wrapped around it. “The brush used to make this is very simple,” says Rich. “It pushes, and it pulls, and it smooths, with options to change the intensity with which it does those things. It’s a bit like Play-Doh”. I’m reassured that this isn’t something anyone could just knock up in a minute, and that it took a good few hours to complete – showcasing the possibilities of what Watts calls the ‘power users’ can achieve. 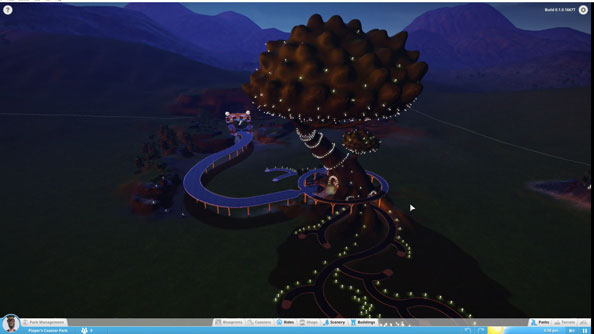 While I in the company of Frontier, the name ‘Cities: Skylines’ is thrown around quite a few times. The city-building sim effectively saved and took over its genre in the vacuum left behind by SimCity, and the more I see Planet Coaster, the more tempting it is to refer to it as the rollercoaster equivalent of Colossal Order’s sleeper hit.

With time running out, I haphazardly throw a few more rides into my park, then proceed to observe the park visitors in action. The designs of the people are lovely – minimal, moulded characters (Play-Doh once again springs to mind) with super-expressionate animations and faces that leave you with little doubt about their feelings. In my case, they don’t seem too happy about having to walk about a mile from the entrance to get to the nearest toilet, though my grand parade leading to my star attraction actually caused some smiles.

Once you hit the ‘Play’ button, the crux of the game comes down to how your guests feel. Watts tells me that Planet Coaster is, at its base level, about “extracting money from guests”, and the layout of your park will play a big part in that process. Walking distance to rides is obviously a factor, but also managing the order in which people go on rides, so placing a few gentle rides between the more extreme ones may appeal to older guests, while segmenting the hardcore stuff away from the kids’ rides will help prevent overcrowding. 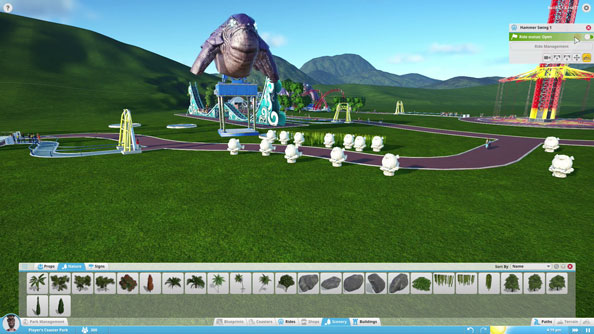 Rich describes with demonic glee about how he even turned one of his parks into a hellish endless loop of rides, where the exits from one ride fed directly into queues for another, then another, then another. Then, after several rides, “they’ll get to go to the toilet, if they’re lucky”.

If, unlike Rich, you prefer to treat your guests like human beings rather than gerbils in an endless maze, your park will need to meet their expectations. AI happiness is judged using an algorithm that takes into account hundreds of minor details that make up individual visitors’ needs and tastes. There are the obvious things like hunger, toilets and excitement from rides, but even the layout, design and thematising of your park will be judged by guests. That’s not to say that guests will stick their noses up at the design efforts of novices like me, but put the time into sculpting your park into something beautiful, and it’ll definitely be appreciated.

And time is one of the biggest problems with a half-hour hands-on of Planet Coaster. It’s a game of deep systems and rich complexity unprecedented in the genre, and I only skimmed the surface of what it’s capable of doing. Things look promising however, particularly as the team working on it – a mix of young devs and stalwarts who have been working on theme park sims since the Rollercoaster Tycoon days – seems to be taking on the task with the fresh-faced excitement of a school trip to Disneyland. 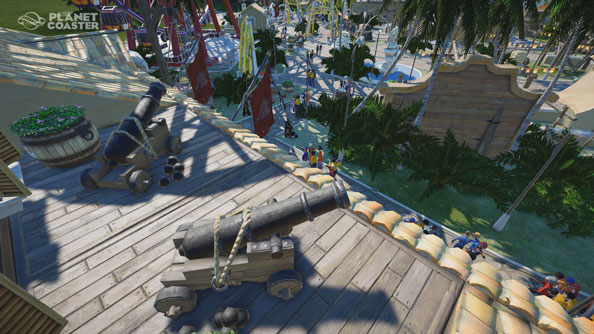 I’m eager to spend more time with Planet Coaster’s robust tools (in ascetic solitude), though I feel that I’ll be more of a consumer than a creator in this game, taking advantage of the community-sharing features to download the beautiful maps and structures, then trying to work out how to lay out a park for maximum profits.

Being the goal-oriented gamer that I am, I’m particularly intrigued to see some form of Campaign mode – not mentioned during my playtime – and hear more about the scenarios that Watts mentions to me (one of which entails building exciting rollercoasters with very strict height restrictions). But the priority for Frontier is clearly to make the creation tools the best ever seen in a theme park sim – and they’re doing a fine job of it so far.

What’s the first thing you’re going to try and build when you get your hands on Planet Coaster’s impressive creation tools? Tell us in the comments below.