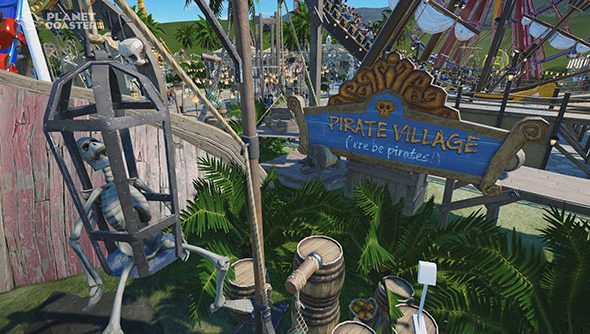 Being what I like to call ‘architecturally impaired’, I’ve never been great at the design side of theme park sims, much as I’ve enjoyed them. As such, I have a begrudging respect for the kind of people who can create beautiful digital theme parks that harmoniously fuse the splines, girders and heavy metals of rollercoasters with the topography of a blank map.

If you like your carefully planning to have a more deadly vibe, check out the best strategy games around.

But even more respect must go to Frontier Developments, the developers of Rollercoaster Tycoon 3 and now Planet Coaster, who make all that theme-park crafting possible. Leading Frontier’s mix of young, fresh-faced developers and veterans who’ve worked on Rollercoaster Tycoon games since the ’90s is Jonny Watts, who I chat with after a hands-on with their latest theme park sim – or ‘deep simulation’, as he likes to call it.

Jonny Watts: My posh title is chief creative officer. I’m also one of the directors at Frontier, and my job is essentially to make sure the game is fun. 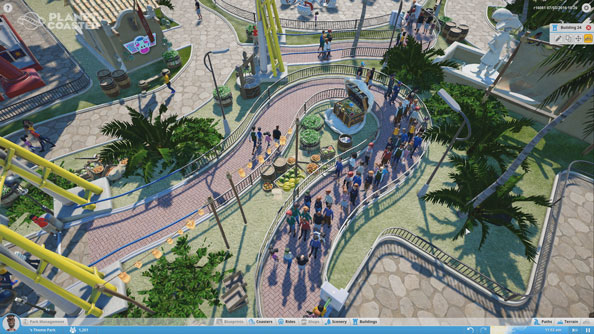 So you’ve been on the rollercoaster bandwagon (or cart) for a while now. What big changes can we expect to see in Planet Coaster on what came before?

Previously, we’ve never managed to do a deep simulation game. Now that we’re self-published, we have that freedom. Games like Prison Architect and Cities: Skylines are out there proving that people want to play proper simulators – there’s a demand for it and we want to satisfy it!

What is the difference between Planet Coaster and Rollercoaster Tycoon 3? The simulation is deeper, and players can get more creative than ever. We want to follow Chris Sawyer’s (creator of Rollercoaster Tycoon 1 and 2) philosophy of letting people build things like Lego – piece-by-piece in an undaunting way.

We want to make it easy for people to build up the modular scenery piece-by-piece, then layer over it with decorations. All the shops now integrate into the modular system, so you can build them into terrain, decorate them, or resize them as you like. We have detailed path systems that can be curved, rather than being restricted to right angles. You can have lovely sweeping pathways like those at Disneyland. We also have a spline-based coaster system, letting you really fine-tune your rollercoasters, getting those all-important angles on the turns and drops just right, smoothing it out until all the kinks are gone.

With the landscape, you used to only be able to adjust it using a height map. Now we have voxel system – a really advanced but easy-to-use tool letting you sculpt landscapes just how you want them. 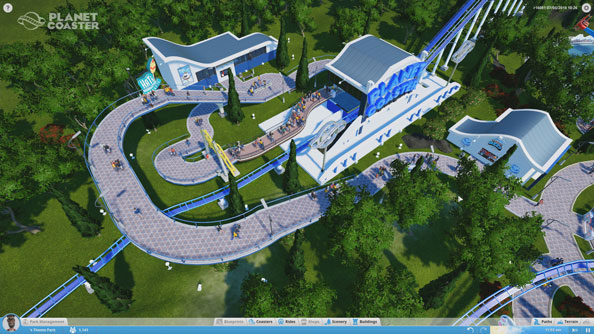 I was impressed by how malleable the map seemed, though I think it’ll be up to people more architecturally creative than myself to make full use of it.

And that’s good, because then you can just download their landscapes and decorations.

Brilliant. I’m happy to sponge off the creative visions of others!

How important is placement of things in the game? Is it just a case of designing a park how you like it or do you have to consider AI behaviour and habits?

All the stuff you create affects the guests. These are real people – real AIs – with money in their pockets that you want to get them to spend. You have to make sure that things are in the right place for that to happen. You might put your exciting rides in the distance and your gentler ones nearer the start. People will then go in, go on a gentle ride and work their way towards the exciting ones while walking past all the shops. That’s where the sophisticated simulation comes in: how you get the crowds of guests flowing through your park will affect how you extract money from them. 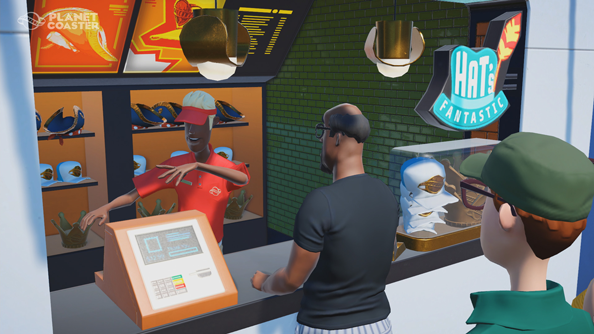 Will there be ways to track crowds’ movements through the park to know where to place shops and so on?

You should be able to do things at first glance, so first of all you can see where people are physically – that’s where the most popular part of the park is, then by their behaviour you’ll be able to see if they’re hungry, or tired, or need to go to the toilet. Then there’s the stuff I like to call ‘nested complexity’, where you can click on people to really delve into their thoughts on your park, which you can then base your business decisions on. We’ll probably have heatmaps as well.

On all these different levels, you can go deeper and deeper to really understand what makes your park tick and how to improve it. But we want to create a game where players have the choice – you can focus on the business side of the theme park, or the design, or both.

This being a theme park game, theming and decorations will play a part on visitors’ happiness and enjoyment. How do the AI park guests work in terms of detecting what looks good and tasteful?

It’s quite interesting to define what a good building is. With Rollercoaster Tycoon 3, we ran a competition where people sent in their rollercoasters. There were 16,000 entrants so we couldn’t do it by hand, so instead we spent a hell of a lot of time writing a heuristic which judged a coaster. It wasn’t just based on excitement and nausea rating, but the ride’s colour, how tight it was, how many loops per metre, how many times it crossed over, and hundreds of other factors.

We’re going to use some of the features from that heuristic in Planet Coaster. It will also know that if you misuse a certain theme or build things on top of each other, there’ll be a score, and that will feed into what guests think. If you put decorations down, that’ll help a little bit, but if you really take care in moulding the park, then that’ll be incremental benefits on top of that.

There are lots and lots of complex algorithms in the background scoring everything you do. Everything you create affects the simulation, and we’re trying to get a level of granularity that’ll be deeper than anything in previous coaster games. 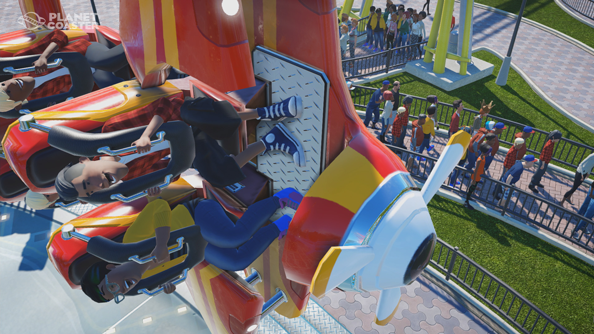 Sometimes with creation sims the excitement can fade once things are up and running. Are you putting things in place to keep the game dynamic and challenging for restless gamer?

We’re gonna have plenty of scenarios and challenges. Because it’s such a deep simulation our level designers can come up with some crazy scenario ideas. One of these will be that you need to build really exciting coasters, but with severe height restrictions, for example. So you’ll have the puzzle of solving how to build something exciting without going tall. Or there’ll be levels with broken paths that you need to use and integrate into your park design in some way.

Rollercoaster Tycoon 3 was relatively accessible compared to 1 and 2, which were for the more hardcore crowd. Has the launch in recent years of games like Prison Architect and Kerbal Space Program inspired you?

Yes, that kind of stuff is absolutely making a comeback. With all the mobile games, there’s been a lot of ‘one-click’ stuff coming out, and I think the antidote to that is these sophisticated simulation games.

We already started doing the deep stuff with Elite: Dangerous. It’s tough, it’s complex, it’s difficult to get into, but once you’re in there it’s hard to get out. Planet Coaster will have the complexity, but we’re looking to also have that accessibility, so kind of merging the best of both Rollercoaster Tycoon 2 and 3. Anyone will be able to build a park using the basic tools, but we also want the keyboard to act as a modifier for power users, so they can create beautiful and intricate parks that make the most of our advanced systems. 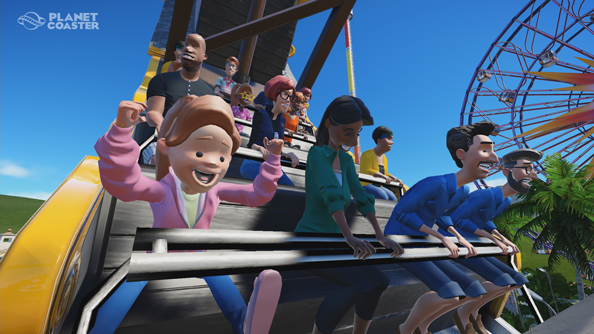 Having made Rollercoaster Tycoon 3 under a publisher and now being self-published, do you feel the differences in the development process?

Publishers are good at asking questions and challenging ideas. What’s great is that now we’re communicating directly with our fans to improve the game. It’s important to have that bit of antagonism, wherever it comes from.

I don’t want to underestimate a publisher’s contribution, but with that said the time feels so right to make this simulation. We’ve been discussing this game, arguing about it and challenging ourselves for 10 years, and we’re experts on it now. At this point, I don’t know if taking all that to a publisher would’ve worked.

We’ve seen other indie games do similar things now. There’s never been a better time to do what we’re doing.

Testing out the first-person ride camera, I had the sudden fantasy of doing those scenes in VR – being able to ride all your custom-built coasters in full virtual reality. You guys already have some VR experience with Elite: Dangerous. Could we see VR applied to Planet Coaster?

We’re definitely experts in VR, and we know what we’re doing, but that’s all I’m going to say on that subject!

Looking forward to making some stomach-churning rides and extortionate gift shops? Let us know in the comments below.