Here at PCGN we take guides writing pretty seriously. Overcoming obstacles, streamlining the grind, and min-maxing builds is our jam. What I’m saying is, we like to push games to their limits, and in the process of learning all there is to know about Planet Zoo’s animals – what they find stressful, their eating habits, and what kinds of habitats they enjoy – we may have accidentally created a Planet Zoo battle royale game. Sorry.

It turns out that animals eat other animals, most of them find the situation very stressful, and placing two of every species in the same habitat and then firing all of your vets doesn’t end well.

The simplest way to get your battle royale off the ground is to make a large habitat, ensure the walls can’t be scaled, and then dump all of your animals in there. While this does work, and your mardy mammals will inevitably start taking out their frustrations on one another, you’ll also lose a lot of animals to stress-related injuries, thirst, and hunger if the habitat doesn’t fulfill their basic needs. And guess what? Animals dying slowly from stress-related injuries isn’t going to get punters through the door.

Read more: Here are the best management games on PC

While it’s pointless to cater to your contestants’ every need, you can at least provide a couple of toys for them to play with, some food, water, and shelter, and some terrain variance. Create a few micro biomes so that your animals are moderately happy and have some space to move around – this last part is key if you want your ostriches to stand a hope in hell of surviving.

I know what you’re thinking, “If we make the animals comfortable then won’t they just live a happy and harmonious live?” Well don’t worry, because there’s a way to ensure all species come into contact with each other on a regular basis: build a watering hole in the middle of the habitat and make it the only source of water. This creates a regular ‘meeting point’ for all of your contestants and even encourages herbivores like rhinos and hippopotami to join the killing frenzy. 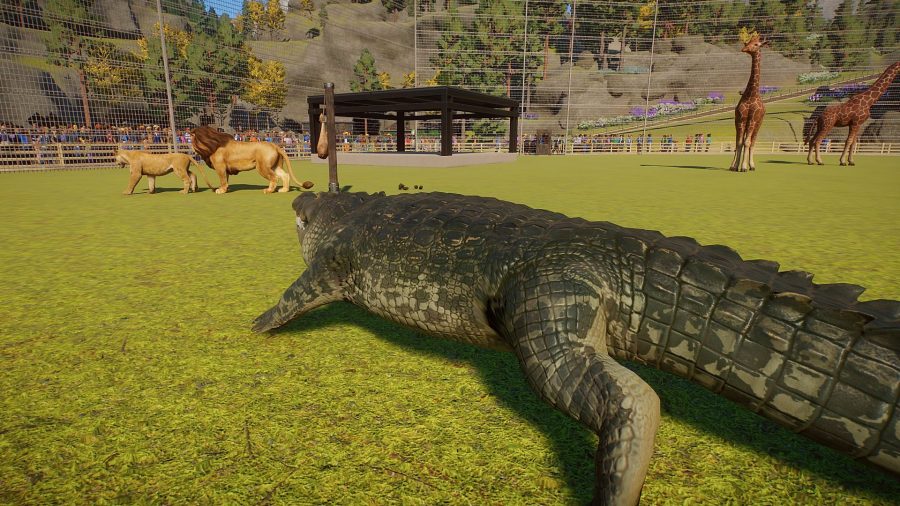 Don’t bother trying to make multiple habitats and then knock down the interior walls so all of the animals are free to kill and maim one another. This is great for ensuring all of your contestants are happy and healthy before the match starts, as you can fine-tune each habitat to ensure the terrain and amenities are spot on for that species. However, the second you remove the interior walls the animals simply run around until they all die of starvation, thirst, or disease. This is because their AI defaults to ‘escaped’ mode – the only way to correct this is by removing all the doors to the previously separate habitats. 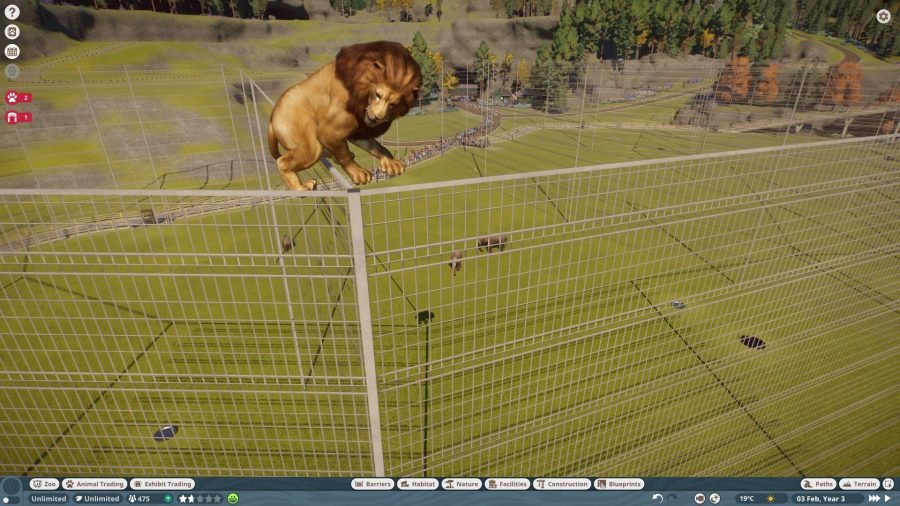 Make sure your barriers are climb proof

This one is basic and applies to all zoos with deadly animals in them, but apparently lions and even grizzly bears are perfectly capable of scaling 20-metre-high walls unless you slap some climb-proof cladding on them. Just as you can’t escape the storm in Fortnite or the blue zone in PUBG, your animals shouldn’t be able to break free either.

Keep the vets at bay

Seems logical that you should have some vets to oversee your battle royale in case there are any escapees, but make sure you’re keeping an eye on their routines so they don’t spoil the competition. By default vets will tend to any animal injuries. This is obviously counterproductive, so make sure you click on all of your vets, open the settings menu, and turn that option off so that all they can do is transport animals and remove carcasses. 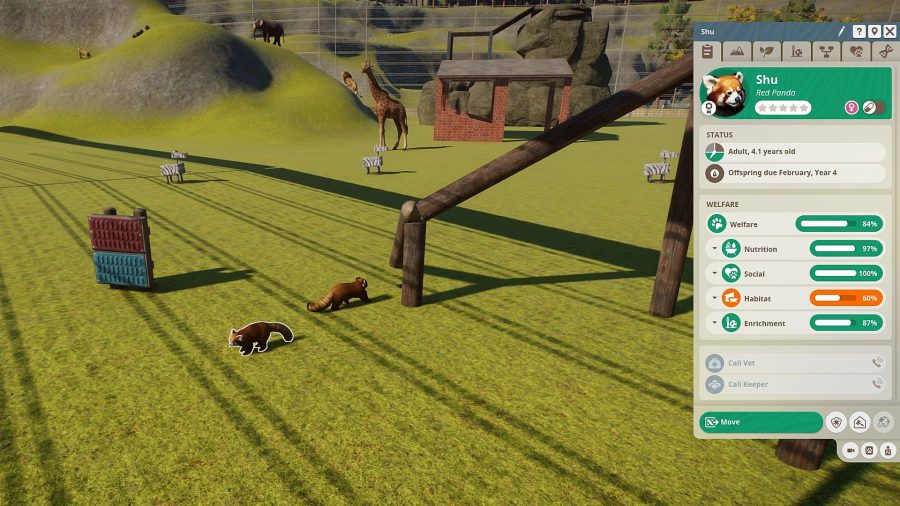 Teach your contestants about safe sex

You can sort out those sordid parents by slipping them some contraceptives in the animal information tab. Alternatively, make sure each species is only represented by one sex. Tortoises and warthogs won in one of our test runs simply by reproducing until all the other contestants died from various diseases. 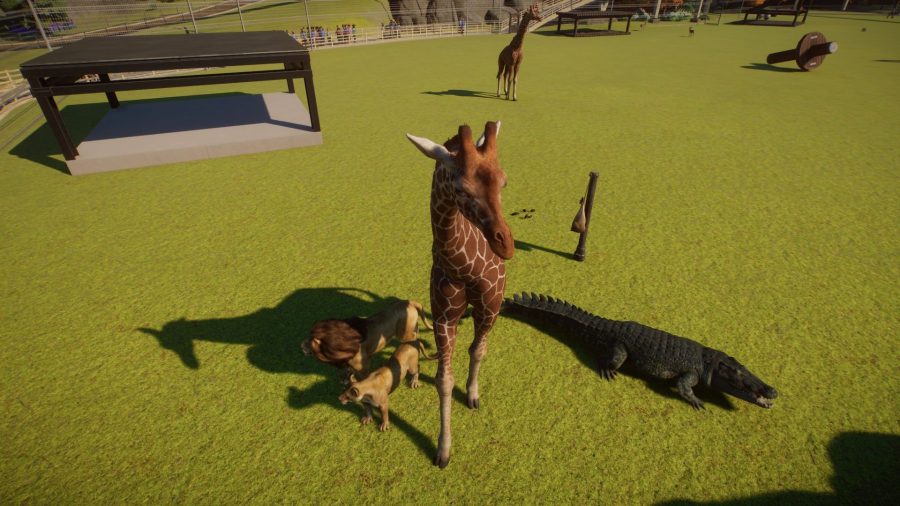 Come up with a robust ruleset

Look, nobody said Planet Zoo battle royale was a perfect format. Herbivores don’t stand much of a chance at scoring highly for obvious reasons, and predators are pretty reluctant to pick fights with each other. We’ve come up with a ruleset that levels the playing field a little. Here’s how it works:

We put two of each animal from ten different species into our battle royale habitat, with an even split between carnivores and herbivores. Each pair of a single species counts as a team, and points are scored for each team until both animals are dead.

A herbivore team scores a point every time they outlive an animal from another team, while a carnivore team scores two points for every kill they rack up. That way, if you end up with an ostrich that legs it every time a predator approaches, it still has a shot at winning. The points will be heavily skewed in favour of the herbivores at first, but once the numbers start dwindling the carnivores catch up fast. 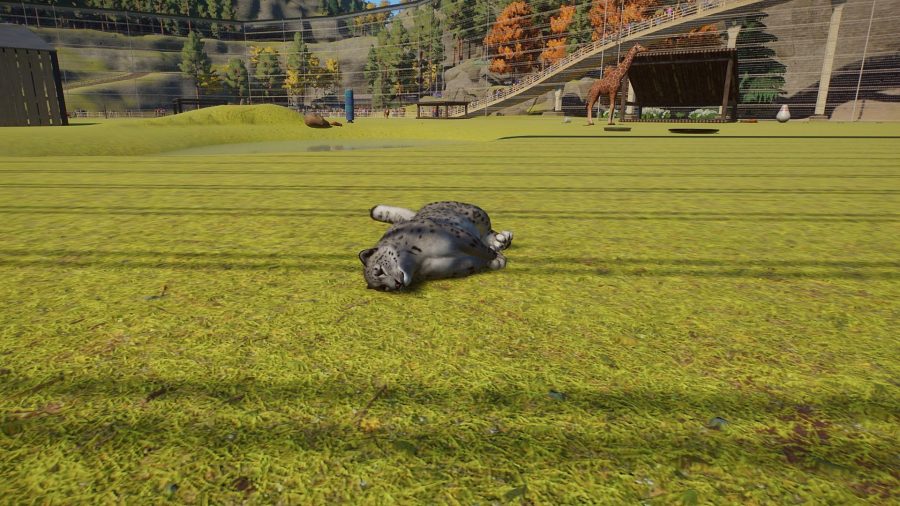 Inevitably, you’re going to have to force your contestants into a final confrontation, and while Planet Zoo’s habitats don’t come equipped with slowly shrinking electrical storms there are some workarounds. For starters, you can simply start closing off sections of the enclosure so there’s less space for critters to escape to. Alternatively, you can start introducing a few catalysts, although we found that results varied wildly. In one instance we introduced a couple of snow leopards to rout out a few herbivores who had congregated in a snowy patch, but they were immediately ambushed by a nearby crocodile. Ah, nature! 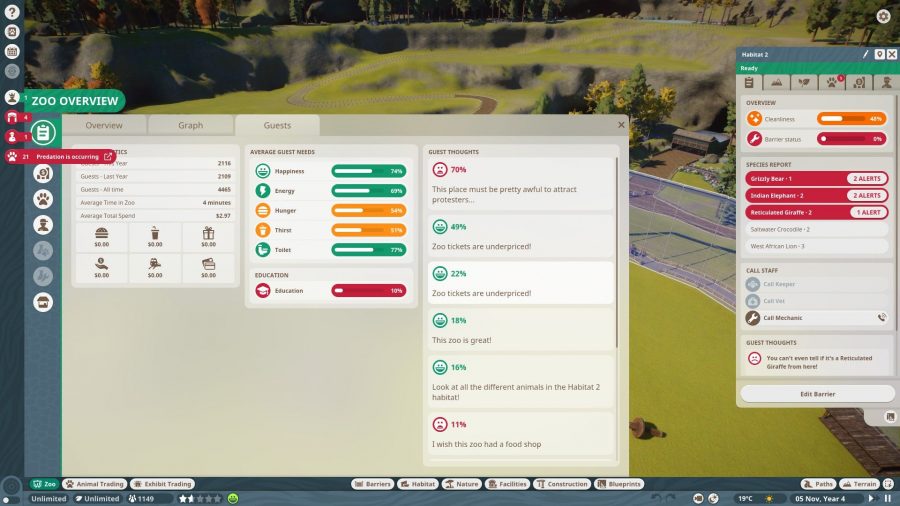 Guests thought we were undercharging for the battle royale, which is equal parts business opportunity and damning indictment of humanity. Raise those prices, build as many donation boxes as possible, and do your best to ignore all of the protestors.

And there you have it, a very sincere and helpful guide to starting your very own animal kingdom battle royale. There’s plenty of scope for changing the formula by varying which Planet Zoo animals enter, how you score points, and the habitat itself. We’re currently experimenting with a Waterworld-inspired BR arena where we gradually increase the water level to force encounters, but the hippos just keep winning.