Planetary Annihilation is massive. The armies – all robotic in nature – can be churned out at an amazing rate, growing into vast hordes; the maps are solar systems, complete with moons and planets, all gently spinning and circling their suns; and the devastation is on a scale that should be obvious from the RTS’ title.

It could have been great. A new, bigger Total Annihilation or Supreme Commander for us to sink our teeth into. But it’s been tossed out the door long before it should have been, and it might as well still have that Early Access tag. 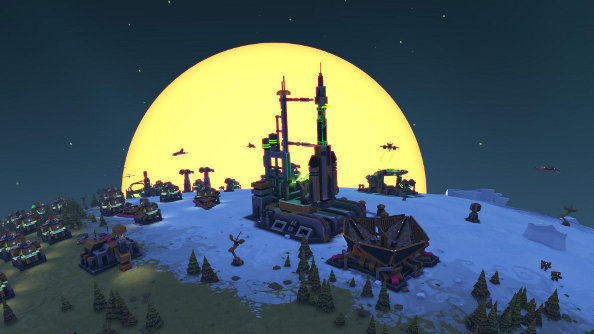 Strategy games, or indeed any game with a substantial amount of depth and complexity, require a bit of education. It begins in the game: tutorials, detailed tooltips, campaigns – the things that teach you the basics first and then give you the opportunity to refine your skills. Then there’s the extra curricular stuff: forums, YouTube videos, in-depth guides – the stuff that will teach you how to master the game.

Planetary Annihilation skips the first part entirely, expecting players to dig their own way out of confusion. It has not time for new players at all. The extent of the education offered is a sidebar in the main menu complete with community videos and an overly-enthusiastic “official” tutorial video that was put on Youtube almost a year ago. That’s what you want to hear when you first fire up a new game: learn how to play by leaving the game and watching some random bloke on the internet play.

This makes one’s introduction to the game an unpleasant one, but when that first commander lands on its first world – it’s impressive. Those annoyances wash away in a huge explosion. Those first steps into Planetary Annihilation are filled with new spectacles and absurd, titanic clashes. 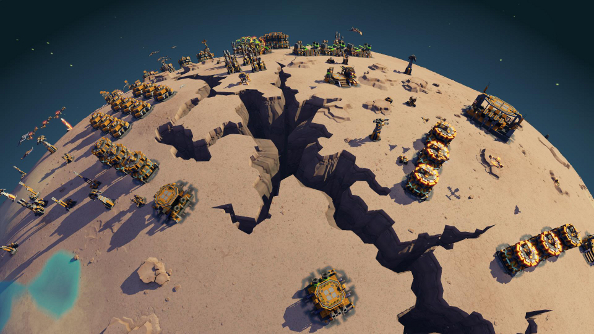 The commander makes planetfall, announcing its arrival with an imposing explosion. It’s a giant mech, and the only unit that players start out with. It’s armed with one-hit kill cannons and the ability to construct basic buildings.

In a game that’s a race to the eponymous planetary annihilation, though, the lumbering commander is a liability, needing to be protected by an army. A swarm of enemies could take it out and spell the end of the game. A couple of energy collectors and metal extractors – which create a pool of resources – get plonked down, then a factory for churning out units, and before long the commander is no longer alone.

Gargantuan armies can be constructed with surprising speed, and with new factories comes the ability to build fabrication units – more builders – with their much larger repertoire of blueprints. A base filled with tiny mechanical units, turrets, AA guns, radars and resource collectors can sprout out of the ground in almost no time at all. 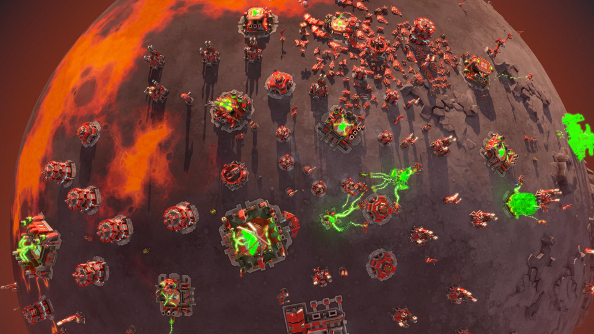 There’s a satisfying cadence to the unlocking of new toys. A fabricator expands the building options, and it can also construct advanced factories, which unlock advanced fabricators, themselves unlocking even more advanced tech. That’s when things get ridiculous.

Nuclear missile silos, orbital launchers, ginormous cannons that can blow up dinky enemies halfway across the world. And there’s the planetary engines, of course – turning moons and planets into impossible weapons of mass destruction. It’s like tucking into a packet of Fruit Pastilles and discovering that all the best flavours are on top.

That first game, and even the next few, entertain with spectacular, planet-killing explosions and nuclear extinction. But eventually those unpleasant flavours are reached. And there are a lot of them. 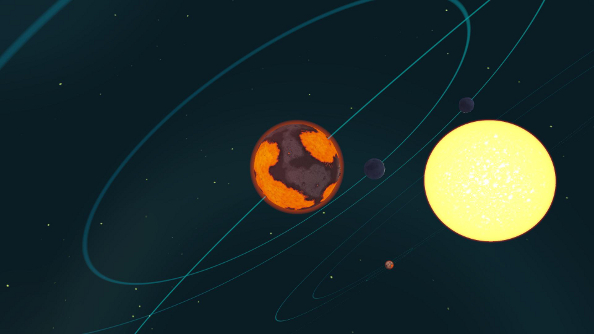 Races can be fun. They can be intense, focused things, too. But they are also exhausting, and Planetary Annihilation never stops being a race. Defensive plays take a back seat when you can weaponise whole worlds. In multiplayer, victory goes to whichever player can click fastest and most consistently. There’s no time to sit back and come up with a plan, because there’s only really one plan: a build order that most people seem to follow that involves churning out tank after tank, creating factory after factory, and never letting up.

Navies get ignored because the tiny oceans serve no purpose and you can just send aircraft over them, and spacecraft are equally limited. There are wee ships that can flit about the orbital layer of a planet, but there’s no variety and the only purpose they really serve is to defend orbital cannons and satellites.

Lamentably, space in general is no fun. It’s somewhere to travel through, and that’s not very interesting at all. When a match reaches the point where players are buggering off to other worlds, it becomes a micromanagement nightmare. There are no effective troop transports, so individual units must be shuttled off, creating a giant mess and wasting a lot of time. 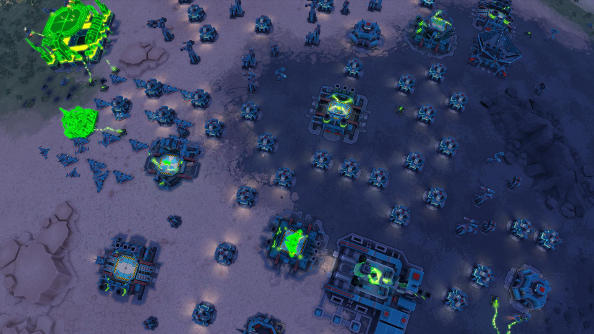 Stargate-like devices are very welcome, in that case. Entire armies can hop from one planet to another in a second – but first another gate has to be set up on the destination world, introducing more faffing. It takes less time to turn a moon into a weapon than it does to plan and execute a proper invasion.

Everyone’s playing with the same tools, as well. There’s only one faction, so every player is singing from the same hymn sheet. The question of balance has always been important in the realm of the RTS, and Uber Entertainment’s answer seems to be: make everyone play the same way.

The Galactic War mode – Planetary Annihilation’s single-player mode – does tweak this a tiny bit. Commanders start off with very few tools, and have to jump from world to world, all over the galaxy, unlocking all of the game’s technological wizardry. Tension is elevated when you’re beset by aircraft that blot out the sky and you’re unable to match them with your own, because air factories aren’t in your loadout. 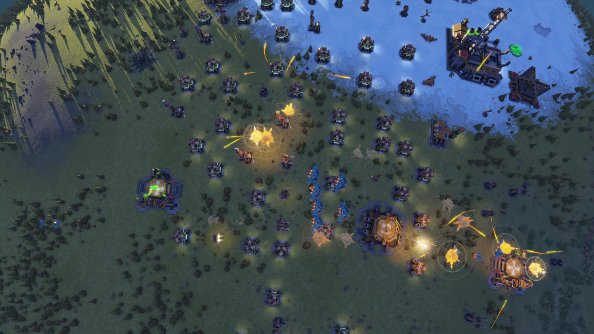 There’s a problem, though: Galactic War is exceedingly bland. There’s no story, no real context and the AI can be abysmal at times. It has the same problems it did during beta – where the AI either constantly throws everything at you the moment the match starts or is almost entirely passive. The whole thing is online, as well, so if the servers are having a bad day or your internet connection is a down one evening, then that’s going to mess up even your solo experience.

And there are rough edges everywhere, no matter what mode you play. There’s the lack of diversity, intro cutscenes that are actually fuzzy YouTube videos, atrocious unit descriptions, planets that are mostly flat, and the emptiness of space. It just feels like it’s not finished yet, like there’s still a huge amount still waiting to be added and polished.

There’s a great game in here, somewhere. Rapidly getting into jaw-droppingly huge wars spanning multiple worlds is brilliant – it really is. And there’s no other RTS that gives players so much destructive power. But the lack of tactical depth and focus on constantly rushing makes Planetary Annihilation tiring.