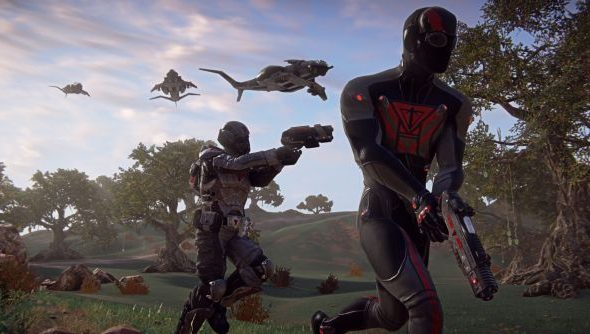 The one feature Call of Duty has unquestionably glued to the contemporary first-person shooter is the personal player upgrade system – a simulation of actual modern warfare, in which soldiers are granted necessary equipment for survival in piecemeal fashion based on how many murders they’ve committed.

It’s difficult for a game like Planetside 2 to accommodate that kind of expectation – it’s a massively multiplayer game designed to be played for years on end, and players are already beginning to ‘cap out’ on the existing unlock system. SOE have a sort-of plan, though.

SOE want to provide players with meaningful character customisation and long-term goals – while at the same time maintaining a fair entry environment for new players, and avoiding potential gear grind. Nothing too taxing, then.

“Right now the cert system is basically THE thing we have to provide for that, which is problematic,” Higby elaborated. “At a certain point people will run out of things to unlock, we’re not trying to run a non-stop gear treadmill game.”

To ensure players have something tangible to work towards once their equipment is up to scratch, SOE are looking into personal progression systems that aren’t tied to gear or player power.

“This will allow us to provide those long term ‘reach’ goals without having to either price new players out of important gear, make a punishingly steep grind for advanced upgrades or continuously inflate the number of upgrades at the end of the treadmill like most MMO games do,” said Higby.

December, the month we currently inhabit, brings the promise of Planetside’s second serious optimisation patch – though it reportedly won’t be nearly so dramatic as the first, and will instead squeeze in a couple of “substantial balance updates”.

How’ve you found the newly quickened Planetside these past few weeks?