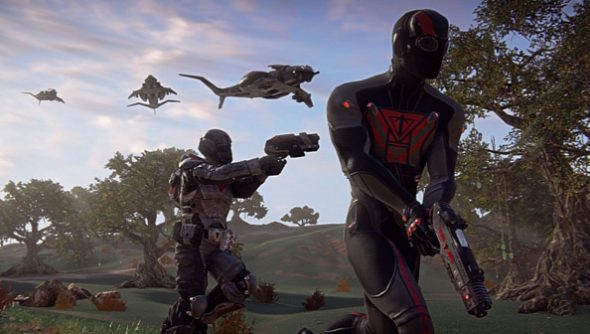 You might have missed it amid the lengthy on-stage explanations of console restrictions due to be retracted a week or two later, but E3 saw the announcement of Planetside 2 for the PS4.

It’ll be out later this year with its free-to-play model and regular update system intact – but despite SOE’s genuinely remarkable achievement in persuading Sony to bypass their laboured patching process, we sadly won’t be sharing armoured vehicles with our plastic-box-infatuated brethren just yet.

“[PS4 players] are going to be on separate servers right now,” SOE’s Adam Clegg told News10. “PC players will still have their servers that we have up and running right now and then we’ll create PlayStation 4 servers for the PlanetSide 2 players.”

That seems a terrible shame, as both games are to be identical bar the UI changes necessitated by the shift to gamepad.

Hear hear. But can’t we play with them, alongside them, on the other side of the barrel from them as well?

Final Fantasy XIV: A Realm Reborn already shares cross-functional and players with the PS3. Is there something about that rather more traditional MMO’s PvE focus and lack of twitchiness that meaningfully differentiates it from Planetside?