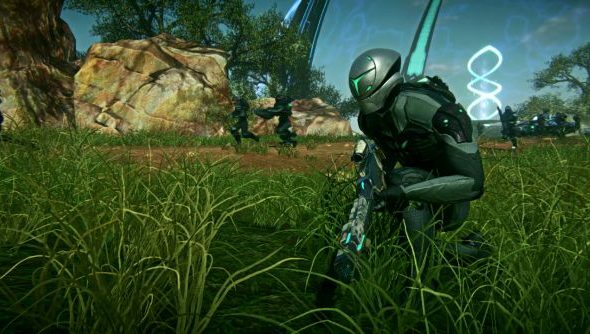 SOE have lifted the NDA on Planetside 2’s external beta today, ungagging players, letting them talk openly about their wounds. Amid the babble about buggies and base assaults, SOE head John Smedley has clambered atop the tree stump of oratory that is Twitter to set the record straight about both the state of the beta and the nature of the game itself.

“People keep asking what lifting the NDA means – it means talk about the game openly. Love it. Hate it. Stream it. Whatever you want. But I want to be super specific about some stuff – first off this game is not finished.”

“80% of the certs and abilities aren’t in the game, but more go in the game every week,” he continued. “We are not REMOTELY done optimizing. It still needs a lot of work on performance. We know that. We play this game every day ourselves and we deliberately have sub-optimal rigs all over the office. It gets better day by day.

“We’re making the game we set out to make but even when we launch it’s not done. We have a plan that spans many years that YOU are going to get a big say in.”

PS2 is dramatic in scale, and Smedley acknowledges that its setup might throw traditional FPS players: “If you don’t like the vast world and the non-arena based nature, play smaller scale games like Firefall or like MW3 or BF3. Those are much smaller scale and probably appeal to many people.

“Just know what you’re getting into with Planetside 2,” he added. “It is the ONLY true MMOFPS outside of the original Planetside. All others are posers. We made this game so we have a game we can play. We just pray you all like it and want to be with us on this journey.”