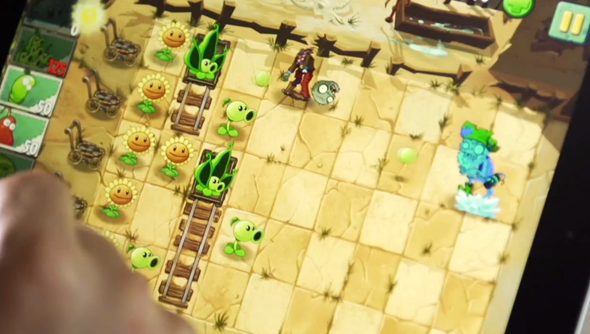 Ever since Jean Claude van Damme’s magnum opus Timecop we’ve known that the best use for time travel is create duplicates of our favourite things. In that case it was to repeatedly steal gold from different points in history to fill your own coffers, in Plants vs Zombies 2 it’s to enjoy an exceptionally good taco time and again.

A new video from PopCap shows how Crazy Dave’s plan for an endless taco sends you spiralling through time and how each time zone will affect the way you play.

The feature you can see at work in the video is the Wild West train tracks acting as a way to transport your plants to where they’re most needed. You can imagine that those levels will feature heavy hordes focusing on two adjoining lanes, forcing you to switch your plants between them to combat the incoming reanimated corpses.

The other eras will likely have similar features, though it wasn’t clear what they’d be from the video.

It looks like the art team have been given a free pass to update the resolution of all the assets and redraw the animations, the game seems significantly crisper and the plants more bouncy with life.

That new world map, too, looks as though you will often have a choice as to which level you play.

Still little word on how exactly the free-to-play elements will come in to the game. It sounds as though all content will be available for free but that to actually retain it you might need to put down money. Not sure how that would work, maybe levels are on a rotating roster and if you want them to replay then you’ll need to pay?

Plants vs Zombies 2 is being released on the mad mobile devices first and will eventually make its way to the stately PC.