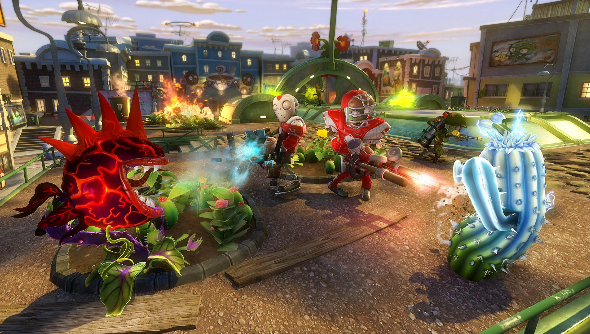 With EA holding custody over Plants vs Zombies, it’ll come of no surprise at all that the shootery Garden Warfare is paying homage to big boy FPS Battlefield. In a new mode under codename Gardens and Graveyards, the Plants and Zombies fight over capture points, much like BF players would in a game of Conquest.

Such a concept would be too simple and dull for Plants vs Zombies though, so there’s elements of Rush thrown in for good measure. Plus flying undead.

To keep the tower defence style of gameplay in tact for a PvZ game, Gardens and Graveyards starts with all capture points belonging to the Plants, with Zombies on the clock to invade and take them. As zombies capture gardens and turn them into graveyards, new areas of the map opens up, Rush style. As the Zombies march through the map, a final objective opens up that must be taken. In the video above, this is a tower that must be accessed by having zombies fly over a stretch of water using cannon fire to propel them. Yup.

I could quite happily play Battlefield until I went into a coma, so wrapping that style of play up in a mentally-deranged PvZ skin tastes pretty good to my palette. It’s going to take a while to tell if it finishes with a bitter after-taste though, since we on PC will not get to play Garden Warfare for an indeterminate amount of time. February 20th is the confirmed date for Xbox 360 and One, but a simple “later” is all the promise the PC gets. Drats.