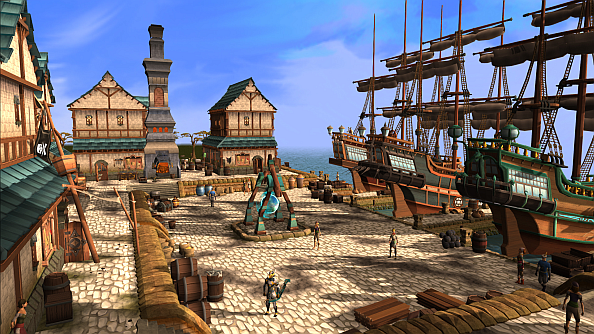 I’ve never tried to round up enough pirates to staff a ship with – it’s a tricky life for startups in the current climate – but if I did I’d want to do so from the comfort of my own port. That, and the ability to lead your new friends into previously undiscovered Eastern Lands, is what RuneScape’s new high-level expansion is offering.

The Player-Owned Ports update tasks players will running their own successful cove. They’ll need to turn the dilapidated Blackpool they’ve been landed with into a “bustling centre of commerce”. But rather than sell the land to make way for megacasinos, they’ll upgrade their buildings to house more ships and attract a higher class of captain and crew for sea fare.

Developers Jagex report that it’ll be tough work, but rewards will include high level crafting recipes and “coveted” eastern armour. If it wasn’t coveted before, it certainly is now.

“Player-Owned Ports is something that our players have been looking forward to since it was announced at RuneFest last year,” said Mark Ogilvie, RuneScape Design Director. “It’s exciting for players on a couple of levels, not only are we allowing them to explore a whole new area of the map which comes with its own lore, monsters and races, but we’re also giving them another bit of the game which they can call their own.

“We’ve produced a large amount of low level content for our players recently, so we wanted to produce something for players who had higher levels and give them something that they could really get their teeth into.”

Lovely. Will you be knuckling down to the business of entrepreneurial pirating?