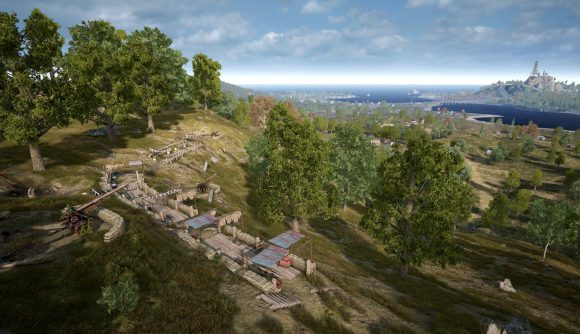 A new survey is asking PUBG players what kind of features they might like to see in the battle royale game. Some interesting suggestions are among the possible answers, drawing from several other established multiplayer games.

The information comes from PlayerIGN, who tweeted out some screencaps and highlights of the questionnaire. The ability to fortify defenses in a building is one possibility that immediately stands out, bringing to mind the way Fortnite integrates construction and active combat. It’s unlikely PlayerUnknown’s Battlegrounds would ever allow you build some multi-story maze in order to trap an opponent, but gathering resources to block doors and repair walls would be interesting strategically.

Another is an item for leaving a “visual marker” that only your squad can see, that highlights enemies on your maps. This is part of what Apex Legends‘ ping system of communication already does. Unless you’ve voice chat, your options for trading information as a squad in PUBG are limited, and developer PUBG Corp is likely very aware of this. Adopting some variant of Apex’s pings could be helpful, but it could also disrupt how players already like to do things.

Another question pointedly asks about what role you typically like to play is in a squad, and the possible answers are aggressor, tactician, leader, and supporter. PUBG doesn’t have as stringent a hierarchy as some other, similar games, and this alludes to the adoption of some of Rainbow Six Siege‘s ideas, where each team features certain roles, and builds based on those roles.

#PUBG asked players how they feel about “construct cover” and “revive” features being added in a recent survey.

As well as other gimmicky items. pic.twitter.com/0HH2pOg2Oz

It’ll be curious what, if anything, comes from this. To access the questions for yourself, you can find it in the PUBG news window as you log in to play. PUBG’s Lunar New Year event is currently happening, including a new mode called Zone Tag.