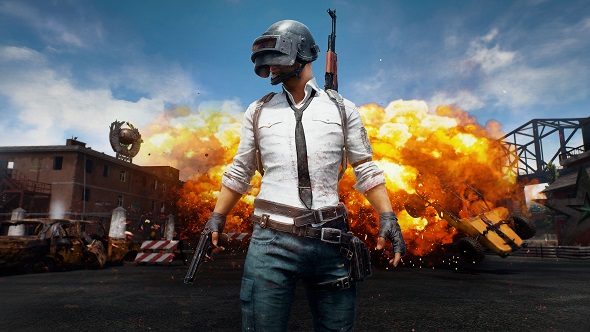 Before release, the game jumped into the top five in Twitch’s most viewed games category, so it’s looking like the online multiplayer game is going to be super popular. At the time of writing, 35,000 people were playing the title.

Test to see if you’re a lone survivor with these PC survival games.

If you fancy picking it up, it’s $29.99 on Steam right now. Check out the new launch trailer above.

Original Story March 11, 2017: Floating around in the top five of Twitch’s most viewed games in the past three weeks, developer Bluehole have announced that PlayerUnknown’s Battlegrounds is launching on Steam Early Access on March 23. Designed by Brendan Greene, the man who created the widely successful Battle Royale mod for Arma 2 (which eventually morphed into H1Z1), this multiplayer battle royale has players fighting over an 8x8km map until one player is left standing.

As is the case with most battle royale games, PlayerUnknown’s Battlegrounds has players scavenging for weapons, ammo and vehicles to survive in a tense ‘fight to the death’ scenario, where only one player can be left standing. Made in Unreal Engine 4, expect hasty alliances, fierce stand-offs and more than a few streamers roaming around in the wilds of this battleground.

PlayerUnknown’s Battlegrounds has been a massive hit with streamers, with Bluehole recording that there were over 85,000 viewers watching Battlegrounds streams over the past two weekends of the closed beta. If you were one of the lucky few who managed to pre-order the game before beta keys ran out and pre-orders had to be closed, you will be able to play during the final two weekends of the game’s closed beta period.

If you did get access to this weekend’s beta test, you can actually play in both solo and duo mode, meaning you can partner up with a mate to conquer the battleground. You can check out the full closed beta schedule up until release over on the Battlegrounds website.

For those who did not pre-order fast enough, you’ll have to wait until the Steam Early Access release on March 23. I don’t understand how you can sell out of a digital product, but apparently you can. There is probably an issue with how much server space is available for this beta period, which doesn’t bode well for the full release. The standard edition is available for $29.99, while the Deluxe edition goes for $39.99.