Update July 29, 2017: It’s all gotten a bit he-said, she-said as PlayerUnknown releases a statement saying the Battlegrounds player banned for stream sniping, Lotoe, was lobby hopping to try to get in the same game as the streamer. Lotoe, obviously, denies it.

PlayerUnknown has responded via Twitter to the accusations that the Battlegrounds community team banned a player for stream sniping without proof. He says that Lotoe “tried to join the same lobby as their target multiple times” – Lotoe claims that he had one disconnect due to a loading bug and that was it.

Stream sniping is definitely one of several ways to not play PUBG.

Here’s the statement from PlayerUnknown:

The main sticking point for the community has been that PlayerUnknown admits he can’t prove the broadcast was being watched. Given Lotoe’s response, that he had “one lobby that failed to load because I was alt tabbed, a common thing,” it would seem a vital step to preventing a misfire without overwhelming evidence. He is in communication with the community team now, after we explained he hadn’t yet heard from them inthis Twitter thread.

Meanwhile, lead community manager Sammie Kang posted about Bluehole’s ban policies in general over on the forums last night. She says that bans are not automated, and do not use information from social media or streams. She also explains that the system is non-final and they are working on it. On Twitter today, she pointed out that they can’t release the evidence for Lotoe’s ban as it may help others cheat the system.

Elsewhere, popular streamer Grimmmz has discussed on his channel getting stream snipers banned multiple times by providing Bluehole with all the necessary information. He points out that all those people said they were innocent too, though their stories didn’t end up as the most popular post of all time on the subreddit.

That link via Reddit, which is currently in the midst of a popcorn crisis like I’ve never seen. We’ll update as things develop.

Original storyJuly 27, 2017:What a messy world online games have become. It used to be simple – kill the bots, top the leaderboards, feel good about yourself, and then go to bed at 9pm because you’ve got school in the morning. Now games like PlayerUnknown’s Battlegrounds have masses of real humans hunting each other, some of them streaming it to thousands of viewers online. That can end poorly if you annoy them and their communities, as player Lotoe found out last night.

As an introduction, stream sniping is where you tune into a streamer’s broadcast while in the same game as them, and use that information to defeat them. In Hearthstone, it means knowing what’s in their hand, in PUBG it’s more about where they are on the map, what they’re doing, and what gear they have. In a world of no-delay streaming for instant chat interaction, it’s as regular an occurence as screen-watching in the N64 days.

Last night, two popular Counter-Strike-turned-PUBG streamers, Shroud and Summit1G, were duoing together. They were killed by a group of stream snipers a couple of times and were understandably a bit annoyed about it. After a short gunfight in which Summit died but Shroud took their mutual opponent out, Lotoe strolled up and killed Shroud. 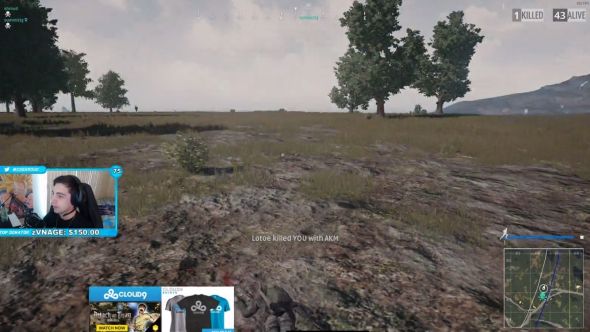 “I was just outrunning the blue [the name given toPUBG’s ever-decreasing kill field] trying to get to the edge of the circle, which was [next to] the fight that Summit and Shroud were having with a duo of stream snipers,” Lotoe explains to me via Discord. “[I] heard all the shots being fired so I went to go [and] get some loot. When I got there, Shroud killed some guy on a hill and went to go loot him and get out of the blue, which is when I shot and killed him.”

You can see it from Shroud’s perspective in this (rather explicit) Twitch clip. Lotoe says that about 20 seconds after that he got sniped himself. He then loaded into another game, eventually died, and was booted to a screen that said he was banned. The assumption is that mass reporting from stream viewers – a fairly common practice – led to the ban.

Lotoe then got in contact with Hawkinz via Discord, a community coordinator for the game, who told him that the ban was for stream sniping and would last seven days. As Lotoe explained then and to me, “I don’t even watch Twitch, if I do it’s normally some ESL thing or whatever.”

Meanwhile, this was all blowing up over on Reddit, where the post from a friend of Lotoe’s sits at 10,000 upvotes and is one of the most popular posts of all time. It’s the latest in a long line of PR problems for the world’s hottest game right now, including the addition of cosmetic loot boxes and people being banned for righteous teamkills.

Lotoe has submitted a ban appeal but hasn’t been contacted by anyone on the PUBG yet. Lead community manager Sammie (PoopieQueen on Twitter – hey, I just write the news, I don’t judge) says there should be a statement soon:

Our team have been looking into this specific issue and it will be addressed soon.

Sammie has not responded to our request for comment yet, and with most of the developers and community team either asleep or attending the ChinaJoy event, it might be a few hours before all this gets cleared up. There’s always the possibility that Lotoe is lying to me and the community at large, but it doesn’t seem likely.

While banning for stream sniping itself is a good idea – ruining their experience is as bad as doing it for anyone else, even if they have tools to fight it – verifying it seems impossible. Given this is the first high-profile incident of it that has happened and, at least according to the people involved, it was a misfire, that doesn’t bode well. It also doesn’t look good in the face of a community that already have a problem with the favouritism and access afforded to professional streamers. The general belief is that Bluehole are already too trigger happy when it comes to the big boot.

We’ll update when we hear more.