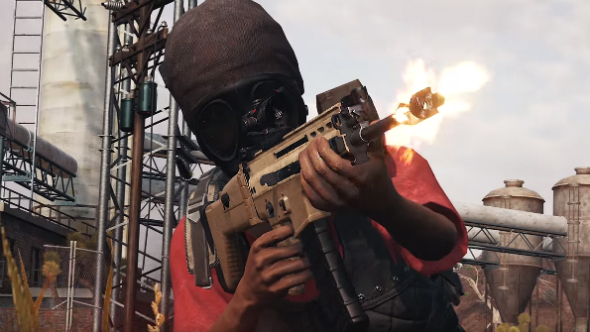 A bit weird to be writing about the release of a game we’ve been talking about for a solid 8 months, but here we are. PUBG Corp. has now launched PlayerUnknown’s Battlegrounds to the masses, and patch 1.0 changes just about everything.

Intrigued by battle royales, but bored of PUBG? Here are a few others you might like to try.

Highlights include the removal of rainy and foggy weather from the Erangel map, to coincide with the introduction of the new Miramar map, and a total rework of the damage model, rebalancing of various guns, plus the new vaulting movement system. Check the full patch notes on Steam.

As part of the 1.0 celebration anyone who logs in gets a free cosmetic Winner Winner Chicken Dinner t-shirt, which PUBG Corp. showed off in an announcement on Steam. They also explain that “this is just the beginning” and they’re already working to combat lag, optimisation, and cheating issues they know are primary concerns. They also thank the community.

There’s been aslight changeto the scheduled rollout of PlayerUnknown’s Battlegrounds 1.0. The update is scheduled to go live at the same time as before, but maintenance downtime will begin two hours earlier than previously scheduled.

Maintenance begins at 16:00 PST / 19:00 EST December 20, or 0:00 GMT December 21, and will last for seven hours. Scheduled release times in the original story below are still correct, barring any unforeseen delays.

PUBG Corp have also offered a bit more detail on how their new leaderboard season beginning with 1.0. For increased stability and shorter delay on ranking updates, only the first 1000 players will have a number-based rank. Places 1001 and below will be based on percentages, and if you haven’t played enough matches or gotten a sufficient score, your rank won’t be displayed at all.

Original story, December 20: After its ludicrous success in early access, PlayerUnknown’s Battlegrounds is finally due for its 1.0 release today, thus vindicating every outlet that included it in their GOTY 2017 lists. Here’s exactly when that’s going to happen.

According to the official PUBG Twitter account, PlayerUnknown’s Battlegrounds 1.0 will release on December 20 at 23:00 Pacific time, or 07:00 on December 21 in GMT.

Here’s how that translates to various time zones around the world:

Server maintenance will start at 18:00 Pacific time today, or 02:00 GMT tomorrow, and last for an estimated five hours. PUBG’s leaderboards will be reset for the 1.0 launch – here’s when that will happen.

Players, we will be leaving Early Access and launching PC 1.0 on Dec 20 11PM PST. The maintenance on live servers for 1.0 will start Dec 20 6PM PST / Dec 21 3AM CET and last for 5 hours. 1.0 release patch notes and our plans beyond the release will be shared with you soon.