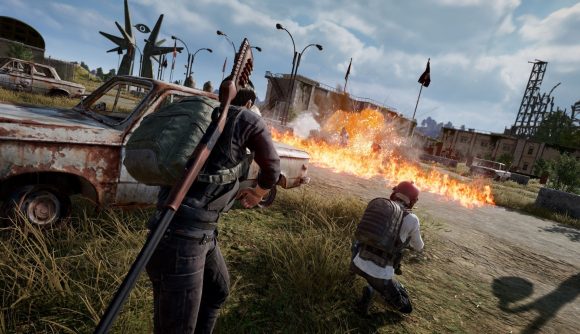 PlayerUnknown’s Battlegrounds is getting a handy new feature designed to help budding players get to grips with the battle royale game’s combat more easily. Developer PUBG Corp’s announced it’ll be bringing bots to the game in the PUBG 7.1 update.

In a dev letter on the multiplayer game’s site (via The Loadout), lead project manager Joon H. Choi says, due to players generally getting very, very good at playing in the last three years or so, there’s a bit of a skill gap appearing between veterans and newbies. “While PUBG veterans continue to hone their skills and improve, we’re seeing more often that many newer players are being eliminated early with no kills – and oftentimes with no damage dealt,” he explains. So, the devs have decided to introduce bots with PUBG’s Update 7.1.

The bots have been designed with three key factors in mind, the dev says: movement, shooting, and looting. They’re programmed to be able to navigate all kinds of terrain, “constantly look out for environmental hazards”, and find the quickest routes to their next objective, as well as get stuck into all the shootouts you’d expect in the battle royale.

For this to be properly balanced, Choi says “players will be able to dodge the bots’ bullets if they use the same evasive manoeuvres as they would in any other firefight. But of course, a computer would still be better at calculating bullet trajectory, so systems were put in to make sure that the bots’ accuracy differs based on range.”

Console Players: With Update 7.1 we will be introducing Bots to public matches.

Read the full details and our intentions behind this addition in our latest Dev Letter:https://t.co/DVUfSaazhF

With bots, the devs adds, the studio is expecting the number of kills to generally climb along with “the amount of items potentially looted”. Getting the amount and types of loot bots carry right is tricky in terms of balance, but based on data, the devs have “set loot targets for our bots, so that they loot and have the appropriate items for each phase”. Phew!

One key thing to note is that bots won’t appear in-game for players with high MMR, however – the higher your score, the lower your chance of encountering one in-game. The new PUBG ranked system coming next month also won’t include bots.

If you’re keen to know more about how these bots work under the hood, take a look at the dev post here. We also have a PUBG weapons guide if you’re keen for some tips on which gear to grab.