PlayerUnknown’s Battlegrounds has a new Deathmatch mode. The new game mode, which is called War Mode, was quietly released with no official announcement from PUBG Corp.

War Mode is currently only available as a custom game mode. It seems that players can play around with the game’s rules in the setup screen, selecting a starting area and player loadouts for all players. The video above shows a game where players drop into a small area on the West coast of Erangel with a UMP and a helmet. In the top left corner of the screen, you can see the player’s rank, and a respawn timer. If a player is killed, they have to wait for the respawn timer to reset, before dropping back into the game when it hits 0. Another video shows players equipped with snipers and ghillie suits.

PUBG Corp recently announced limited time game modes for their battle royale, which began a couple of weeks ago. This is different, however, as it is currently accessible only through custom games. What’s also slightly strange is that the developers have made no official mention of the new mode via social media, in patch notes, or in any other announcement. It’s possible that the game mode will be announced over the weekend, or will be the next limited time mode. 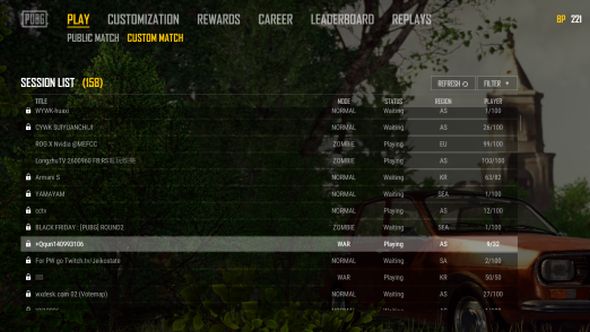 We’ve reached out to PUBG Corp for comment, and we’ll update when we know more.