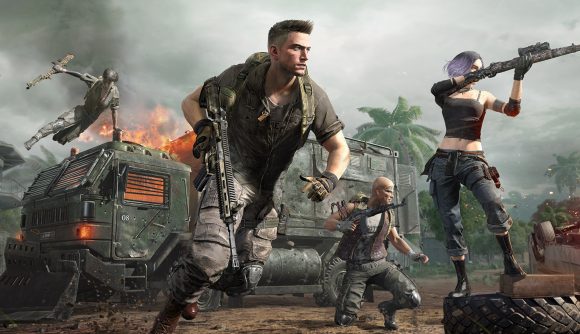 A new batch of items is on the way for all you battle royale fans out there who have been following along with the PUBG Global Invitational.S esports tournament. PUBG Corp reveals on its Steam page that the second batch of PGI.S items will be arriving in the esports shop on February 26, so you don’t have too long to wait.

The developer explains that you can buy the new items from 9pm EST / 6pm PST on February 26 (2am GMT on February 27). They come in addition to the shop’s current items, too, so you can still buy some goodies from the previous batch if you fancy it. These items are hanging around until March 27, so you’ve got plenty of time to weigh up if there’s something there that takes your fancy.

This time around we’ve got parachute, SLR, Mosin Nagant, Scar-l, and mini 14 bundles on offer for two voting coupons. The most expensive pick of the bunch is the PGI.S Hydrodip weapon pack that’s worth 11 voting coupons.

If you’ve been out of the loop, the PGI.S has been rumbling on since the beginning of February and is set to last until March 28. Every PGI.S purchase goes toward supporting the teams and contributes to the total prize pool.

Gcoin costs aren't listed, but each item will be sold with 2 voting coupons, in an addition to a weapon pack that comes with 11 coupons. pic.twitter.com/R3zBRVoipm

If you’d like to read more about it, our sister-site The Loadout has a write-up on how PUBG has “every unexpected event” covered for the tournament in the face of the pandemic.