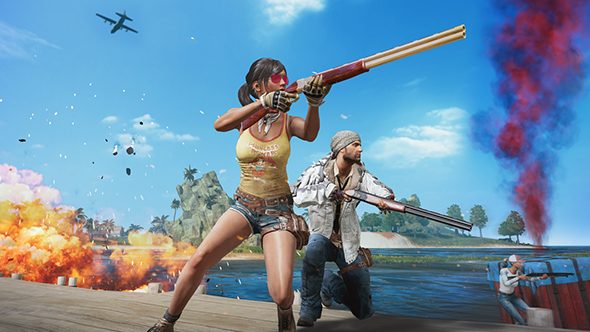 PlayerUnknown’s Battlegrounds got its equivalent to team deathmatch earlier this year in the form of War Mode, and the new map Sanhok made the normal flow of the game much more action packed. Now PUBG Corp is taking the next logical step by combining them both in a single event mode.

The latest PUBG event brings War Mode to Sanhok, equipping players with shotguns and pistols in team versus team combat, featuring ten 5-man squads in each match. Like previous War Mode events, players respawn, and the winning team is determined by whoever reaches 200 points first, or whoever has the most points when the 15 minute time limit elapses.

PUBG has attracted plenty of competition, but which is the best battle royale game?

You’ll drop in with a shotgun, handgun, frag grenade, and bandages, and can loot care packages for DMRs, sniper rifles, and other powerful items. You’ll find no world loot aside from those drops, and no vehicles either.

This week’s update also makes some important changes for the event’s host map. Most importantly, it corrects the Sanhok exploit that let players hide underground. The island map will also get some visual enhancements, with some extra cracks and moss at the ruins, and better looking rocks across the board.

The most obvious change will hit you right at the main menu, with a new look, loading screen, and music to set the mood for the first PUBG Global Invitational, which hits the scene later this month with a $2 million prize pool.