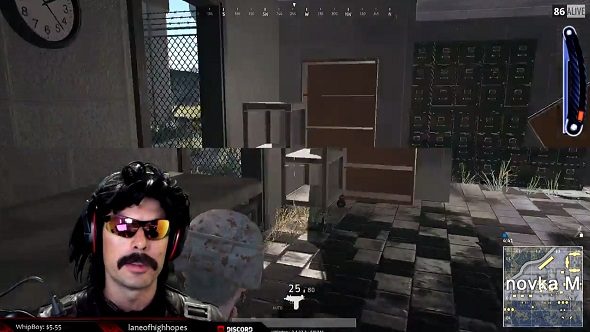 Update July 19, 2017: Yesterday, a well-known PUBG streamer called DrDisRespect was banned from the game for team killing. He also had a public argument with the game’s lead, Brendan Greene, on Twitter, in which he threatened to kick the developer in the chest.

It turned out Greene had been in an altercation in the past where he was actually kicked in the chest. The result was that his head went through a glass panel. Greene wrote about the experience in a blog post, in a bid to educate on the power of words.

If you are a team player, check out our list of the best co-op games.

After all that, DrDisRespect is back, as he’s created a new account to bypass the ban. He’s streaming as normal but now his in-game name is “GlassWindow.” The first stream he did was named “Jump Kicks,” so he’s really leaning into his character now, despite the measured response from Greene previously.

The streamer also said this about the ban:

He’s also taunted Greene in other videos on his channel:

Original Story July 18, 2017: A famous PUBG streamer just got banned for killing a teammate live on video. In the clip, DrDisRespect is seen to gun down a member of his squad to ensure there was room on a motorbike for him and the remaining two teammates.

Here’s the clip in question:

DrDisRespect would have gotten away with it, too, if it wasn’t for those pesky mods. He carried on streaming for the rest of the game and was planning to do more, but then this happened:

The timing of him saying he was going to carry on streaming and the moment realisation hits is just perfect. This is what happens when you break the rules, especially rules that are explicitly stated in a game’s TOS. The ban will be lifted at some point, but hopefully he learns his lesson.

As Brendan “PlayerUnknown” Greene himself puts it: rules are rules, no matter who you are.

If you break the rules in @PUBATTLEGROUNDS… no matter who you are… you're gonna have a bad time!

The above tweet wasn’t the end of it though. It led to a public spat between DrDisRespect and PlayerUnknown, which culminated in DrDisRespect joking that he would “roundhouse kick” the developer in the neck if he could.

PlayerUnknown didn’t take too kindly to the flippant remark, so he’s spent the day with people telling him to learn to take a joke. He’s since released a blog post to explain why he didn’t find it funny, however – noting that comments like this can remind someone of a traumatic moment in their lives.

“When I was in college, many years ago, I had a disagreement with my flatmate,” Greene explains. “Instead of talking it out like men, he decided to get aggressive and while I was backing away from him, he kicked me in the chest and put my head through a plate glass door. Thankfully, I don’t suffer from any ill effects due to this experience.

“The point of that story is to attempt to explain why I think even the threat of violence is not something that should be joked about. Given my experience in college, and the fact that The Doc’s threat, even as a joke, synced up closely to a bad experience I endured, it could have brought up bad memories, triggered a panic attack or had other consequences The Doc might not have intended when composing the tweet.

“All I ask from anyone that reads this is to consider that your words, however flippant they may be, could have unintended effects on those reading them.”

It seems like good advice for anyone. Be nice to people and they’ll be nice back. Oh, and don’t kill your teammates.

Outside of all that, it is good news that streamers won’t be getting special treatment. It doesn’t exactly set a good example for the community – the game would be awful if everyone team killed. Bluehole have been pretty consistent with this message, though. The game takes priority.

It’s like with Twitch interaction. While Twitch accounts can be linked to the game, whatever functionality comes from it will in no way affect the vanilla experience.

“Twitch, Bluehole, and users all have a lot of different ideas regarding which features to add in the future,” executive producer Chang Han Kim told PvP Live. “PUBG is very unique game because it appeals to both players and viewers. It would be very exciting to encourage viewer participation through new features.

“I do not plan to add any element that may affect the balance of normal games. That being said, it would be interesting to test out some features in Custom Games. In film series The Hunger Games, wealthy sponsors provide crucial supplies to their favorite tributes throughout the competition. It would be fun to add more features and strengthen direct interaction between streamers and viewers.”