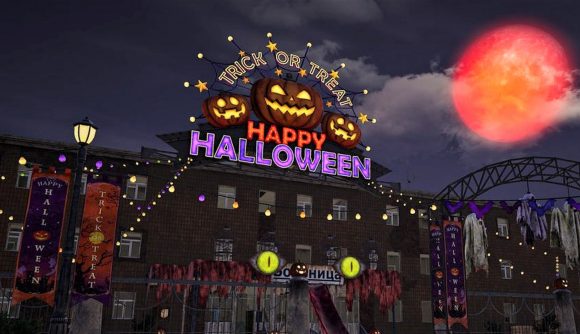 The spooky season is beckoning, which means we’re starting to hear about the Halloween-style events developers are cooking up for the biggest and best PC games this year. One of the first we’ve heard about for 2021 is coming to (the newly rebranded) PUBG Battlegrounds, with some suitably spooky makeovers of the battle royale game’s base map, Erangel, on the way.

“Trick or treat! It’s that season of the year again. To maximise the Halloween vibes, we have finished decorating some parts of Erangel,” Krafton announces in the PUBG patch 14.1 test server notes. The map’s school, hospital, and starting island areas have been given a Halloween-flavoured makeover ready for this year’s most spine-chilling of days. There’s a new themed weather that brings “unique moon colour and fog in certain areas”, which applies to PUBG’s normal and custom match game modes. With the changes, the chance of getting Halloween-style weather is now 30%.

Elsewhere, you’ll find care package smoke colours have been changed to “Halloween colours” – presumably bright orange, black, and that kind of thing – as well as mummy coffins scattered around the three areas mentioned above. The game’s lobby has also been updated with a Halloween theme on the test servers.

As for whether there’ll be a Halloween tie-in event to go along with these new cosmetic changes isn’t confirmed right now, but dataminers seem to have found some indications that there could well be one coming up. For example, PlayerIGN has tweeted about some findings that could point to a game mode and others bits coming up:

There's an upcoming Halloween event with PUBG partners giving away Twitch drop items including: sprays and the pumpkin head.

The jacket and hoodie skin are for partners.

More interestingly, the Halloween game mode will include "monsters." pic.twitter.com/zpgbXRNUyX

There are also some alternative shots of Erangel’s spooky makeover:

Elsewhere in the patch notes, the devs are testing some world improvements to Taego and introducing a new feature exclusive to that map called the ‘Error Space’, which will let players “gather other map-exclusive weapons and supplies to be spawned randomly within these zones”. Then there are some various other Erangel updates, a new carrying feature that lets you, well, carry downed friends (and foes) around – “before they bleed out, that is” – and a lot more besides. Head to the notes here for the full rundown.