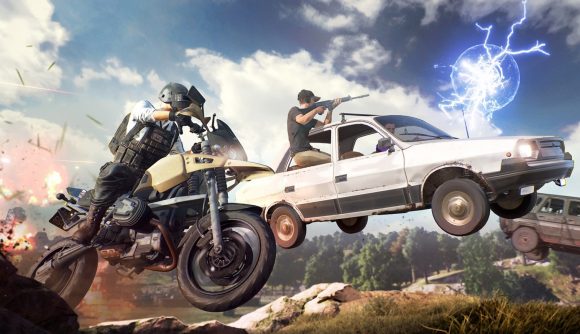 There's a new and experimental limited-time mode available in PUBG Labs right now called Zone Tag, and it's all about fighting for control of a glowing ball of energy. Zone tag is available on PC until February 15, so you'll want to hurry if you want to give it a try.

Zone Tag is built around a ball of energy that can be picked up and carried by any player. When you pick it up, you'll be bathed “in a pillar of light” that follows you around until you're knocked down and the ball is picked back up. The entire blue zone is centered on this ball, so whoever has it is always going to be in the very middle of the safe area on the map, which for Zone Tag is Erangel. This continues until phase six, at which point the ball disappears and the match proceeds as usual, with the remaining squads duking it out for the chicken dinner.

You may be wondering why anyone would want to pick this ball up at all – why not let someone else take the heat? Well, the squad that controls the ball gains unlimited boost gauge, which is a nice advantage to have when everyone within 100 metres knows exactly where you are.

There are some restrictions on where you can carry the ball in Zone Tag: you can’t visit the small islands around Erangel, some rooftops are off limits, and ferries are prohibited. You can still go to these places, but the ball will detach from your character if you do. Perhaps more importantly, though, is the fact that entering the water will cause damage – so you’ll want to be careful about planning your movements while you’re the ball carrier.

PUBG Corp says Zone Tag is meant to be a “fast and furious” experience, and thus, land vehicles will spawn everywhere possible during these matches. These are invulnerable to weapon damage and tire punctures, and everyone inside gets unlimited ammunition for the duration of the ride.

Buy now: Here’s where you can grab a copy of PUBG

A few more key notes about Zone Mode: bots do not know how to play it, and so you won’t see any of them in Zone Mode matches – you’ll need at least 40 human players to begin a game. These matches also won’t count toward your career or grant XP in the battle royale game, and you won’t be able to count these rounds toward Survivor Pass missions. It’s all just a way to have new, experimental fun in PUBG.