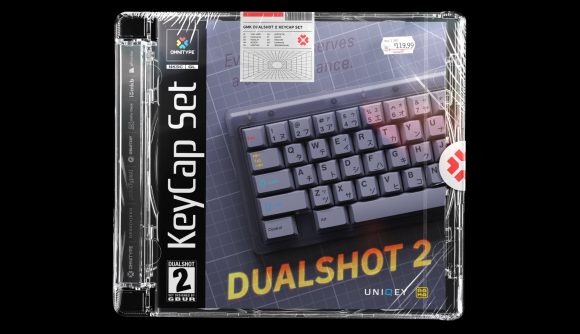 March 7, 2021 The group buy for Omnitype’s PlayStation keycaps is now live until June 4, alongside a Dualshot mouse mat and macro pad.

Nothing makes the best gaming keyboard pop like custom keycaps, giving your setup a splash of personality compared to the dull black husks you’re usually lumped with. If you’re into the retro aesthetic, accessories vendor Omnitype has something nostalgic in the works with its Dualshot 2 range, which will let you dress your gaming keyboard up like the classic PlayStation console when it launches next month.

Omnitype’s GMK Dualshot 2 keycap set and the Dualshot 2 cable are predominantly grey, with dashes of colour reminiscent of the 26-year-old platform. Despite the name being a direct nod to the Dualshock controller, the colours take after Sony’s original PlayStation logo, with red, green, blue, and yellow instead of the square button’s pink.

Instead of focusing on the US ANSI layout, like most custom keycap makers do, Omnitype has covered virtually all bases by offering the GMK Dualshot 2 keycap set with a variety of different bases and additions, including Katakana keycaps, coloured accents, macros, and an international set. It won’t come cheap, though, even if these are ABS keycaps, costing from $24.99 to as much as a brand new keyboard at $119.99.

This is Omnitype’s second run at keycaps inspired by the 90s console, after debuting the first generation back in 2019. Much like its first set, Dualshot 2 is sold in what’s called a group buy.

GMK DUALSHOT 2 is live for anyone who is awake. 😅
50 bonus rewards points for the first 24 hours at https://t.co/5IAJDAcxiw. pic.twitter.com/ybSbGuEDOo

In a group buy, the product isn’t actually in stock and you only have a limited window to put your name down until they disappear forever – unless Dualshot 3 becomes a thing, that is. Dualshot 2 will be available to buy until June 4, after which Omnitype will stop taking orders and start making the products. This means you could be waiting a while for your keycaps as each batch is shipped in stages, but you end up with a unique product that’ll make your setup pop.

There’s still no sign of the Dualshot 2 cable, but there are more items than we initially expected, such as a themed desk mat starting at $25 (briefly down to $17), a single aluminium keycap with the Omnitype or Dualshot logo for $44, and a six-key marco pad in the style of the PlayStation’s controller port for $125.