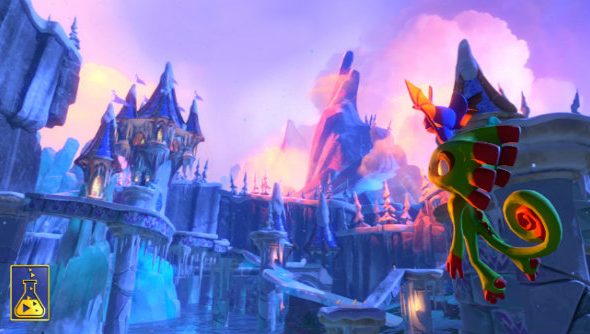 PlayStation 4’s recent Ratchet & Clank reboot gives me high hopes for the future of 3D platformers, and Yooka-Laylee looks set to mark the next step in the genre’s revival. Playtonic have been quiet on the game for a while, but today they decided to lift the lid, revealing a little more information and showing off some lovely, lovely screens.

If Yooka-Laylee looks too colourful for you, there’s plenty of grey and bown in our list of PC’s best FPS games.

Yooka-Laylee will be based around the devious deeds of a dodgy publishing company, with our lizard and bat heroes tasked with seeking out “the magical Pagies required to explore the mysterious Grand Tomes”.

This story will feature a cast of colourful characters, from a trouser-wearing snake (yes) to aexosuit-wearing fowl. You’ll battle, platform, collect secrets and explore a gorgeous, varied world. 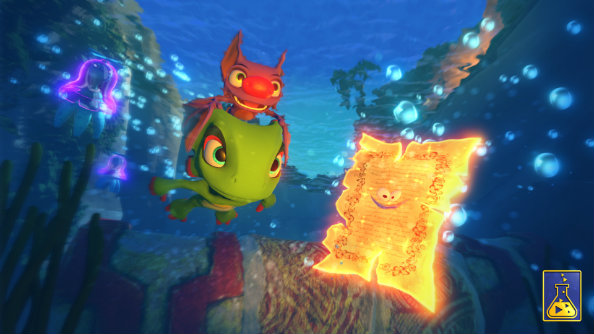 While there’s no release date just yet, Playtonic have said they’ll be revealing more in the coming weeks, as well as showing off some new stuff during E3. As for backers, they’ll be getting access to the expanded Toybox in July.

Toybox is a standalone demo that shows off the game mechanics without spoiling anything. It was originally planned to be much more simple, but the project increased in scope and should now be a decent offering to sink your teeth into when it releases in a couple of months. Check out the full details on Playtonic’s blog. 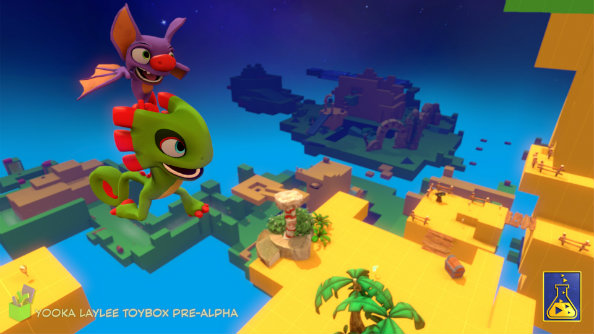 “As promised in our Kickstarter campaign, the Toybox isn’t a traditional ‘demo’, but a self-contained, spoiler-free sandbox designed to give Yooka-Laylee backers a taste of the platforming to come in the final game,” says the blog. “There are plenty moves to try, custom-built props to play with, secrets to discover and yes, shiny collectibles to hunt out.

“We appreciate your patience and hope you agree the wait was worthwhile when you’re jumping around in our sandbox in a number of weeks’ time.”