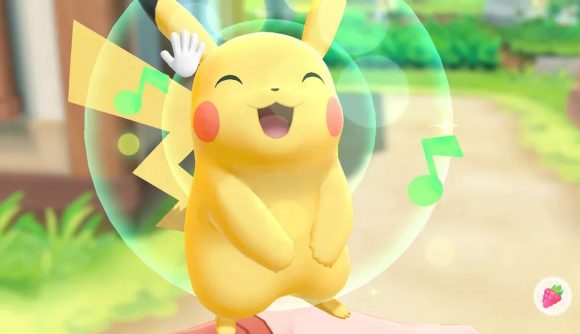 My editor is not currently sitting in the office, and I’m yet to get adequate revenge on him for the time he referred to Pokémon fans as weebs. With all that in mind, I’m here to tell you that it’s already possible to play the latest iteration in the world’s most adorable franchise on PC.

Pokémon Let’s Go released last week, with two versions available – one for Eevee, and one for Pikachu. Despite being out for less than seven days, the game is already running on a Nintendo Switch emulator for PC, meaning if you don’t fancy dropping a few hundred on Nintendo’s latest console, you do have another option.

That said, it’s not going to be the smoothest ride. In the video from YouTuber Unreal below (via Kotaku), you can see the game running on the Yuzu emulator, but it’s not perfect, by any means. The music and most of the sound effects suffer from some significant distortion, and none of the text has loaded in properly. It’s also being run on a properly powerful rig, so you’re not necessarily saving yourself much money if this is the way you choose to invest.

It is, however, pretty decent progress for just six days of work, and could mean that we’ll see more progress on Switch emulation. And if all you want to do is play through the re-vamped Kanto map, you could be in for a pretty good time.

The Pokémon games have a rich history of emulation, but over the past few years it’s proved significantly simpler to get older games working. The Legend of Zelda: Breath of the Wild was emulated not long after its release, but it was the Wii U version of the game, not the Switch one, that was ported.

It’s a pretty rough time for emulators at the moment however, as mounting pressure from publishers threatens those who maintain them. Popular emulation site EmuParadise closed its ROM library earlier this year, while the married owners of two other ROM websites were ordered to pay Nintendo more than $12 million in damages earlier this month. An Arizona judge found that the owners of LoveROMS.com and LoveRETRO.co had infringed upon several of Nintendo’s copyrights.