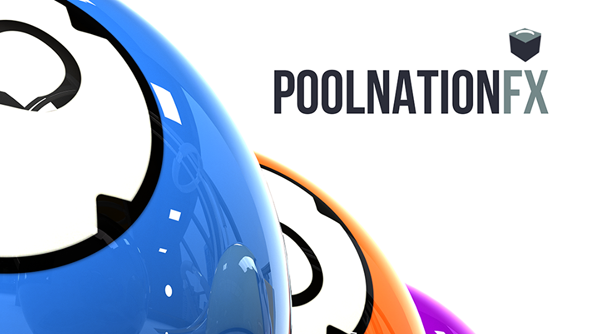 When I saw Pool Nation FX at EGX there was a crowd of people round the monitor, muttering advice to the player at the keyboard, and holding their breath each time the ball rolled towards the pocket. If it weren’t for the lack of pints, the giant Call of Duty booth below, and the people walking around in cosplay you could mistake it for a scene at the pub.

That’s exactly what CherryPop are aiming for: a pool table at your desktop. One you can play with friends the way you would at the pub. It also offers more than your local, you can play in tournaments, shoot frames at tables in settings all over the world, and sign up to Fifa-style leagues with both friends and strangers.

It’s easily going to be the best pool game on our platform.

You may have heard about Pool Nation, CherryPop’s last game. It was one of few pool games on PC, outside of Miniclip. As good as it was, it fell short of what CherryPop wanted to make and what its players wanted to play.

Pool Nation FX is a complete and high-tech rebuild, courtesy of Epic’s latest version of the Unreal Engine. “A lot of people have said that it’s not the game you’d expect to be made in the Unreal Engine,” CherryPop’s Gemma Jessop admits. “It really gave us the ability to do things we couldn’t do before. Where our engine was limited was on changing rulesets, changing ball types, all the different things that we can now do more easily.”

When CherryPop moved to Unreal they “stripped back everything” and started again. They rebuilt the career mode so you now actually have a career: “you travel round the nations earning money, unlocking tournaments as you go.” Online was rebuilt to introduce Fifa-style leagues where you can get promoted and relegated through the leagues depending on points earned from matches.

CherryPop overhauled the physics engine so you can put spin on the ball’s bottom and side, whatever you can do in real life.

They made the rigid game rules of Pool Nation more customisable so “you can play it your way,” Jessop explained. “You can lag on the break – where you have to shoot up the table to see who breaks first -, you can do two-shot carry, and trickshot on the black.”

CherryPop have added in fun pool-style games, like the new endurance mode where 24 balls land on the table and you’ve got to pot them as quickly as possible. There’s trickshot games that take advantage of the improved physics engine, doing things like jumping the white over a ball to pot the black.

You can bet your in-game earnings too. CherryPop’s looked at doing real cash betting but while “it is a possibility” at the moment “it’s not in there.” With the newly added Twitch integration, I’d be surprised if people didn’t start doing it outside of the game.

At times the table looks real. CherryPop have built six famous clubs from around the world. Each one has a ton of different tables in different rooms to play so you’ll never be stuck for variety. And “Every location has time of day so you can go in when it’s dark and moody, it’s lit differently.” You can taste the stale beer: CherryPop’s attention to detail shines through via polished balls, the hefty looking cue, and the matt green felt.

Pool Nation FX should be out in December. It will be made available as a discounted upgrade for owners of Pool Nation.