There’s an argument to be made that Fallout 76 was always doomed as an online survival game. Knowing that it would inherit an audience from previous games in the series, Bethesda dampened the spikier crescendos of player interaction – making PvP optional, nukes easily dodged, and bases quickly repaired. It might have been the best call to make for players wary of having their junk runs ended prematurely by a super sledge in the back, but it also sapped the tension from chance meetings.

Coming across another player mid-quest is more often an interruption than an event, over after an awkward exchange of emotes. It’s certainly not comparable to the heart-in-mouth encounters of games like Rust – the survival gaming landmark that inspired Enplex Games to make Population Zero.

“At the core of any survival game lies ‘cooperate versus dominate’,” the studio’s Dmitry Muratov argues. “When you meet another player in Population Zero, we want you to be curious, scared, and possibly hostile. Especially if you’ve gathered enough resources to be afraid to lose them. Unlike Fallout 76, where they can’t attack you, you find yourself in a situation where you’ll be really cautious. You never know. Another player should be a source of excitement.”

This pitch is perhaps not as uncompromisingly hardcore as it seems. Enplex Games’ staff, veterans of Russia’s largest game development corporations, found they couldn’t match the trigger fingers of the younger opponents headshotting them in survival games, and so have plumped for a melee-focused combat system for Population Zero. Plus, it turns out testing your game in Russia is a trial by fire of player interaction. “We have a philosophy that a player is a loot box to another player,” Muratov says.

Read more: Hack at a tree in the best survival games on PC

By the time Population Zero goes international, then, any potential for griefing should have long since been addressed. The studio has devised an organic take on MMO zoning, for instance, that plants better resources further out in the world so that high level players aren’t constantly hanging around the early zones and haranguing their peers.

This is no empty murder park. The team was inspired not just by Rust and The Forest but also Firewatch, the high water mark for contemporary environmental storytelling. “We hope to actually get players interested in the world the same amount as surviving it,” Muratov says.

In fact, Population Zero does take one key pointer from Fallout 76 – players will be the only initial conversationalists on the surface of its sci-fi planet.

“It has nothing to do with the budget,” Muratov says. “We don’t want questing via an exclamation mark above somebody’s head – we want you to naturally explore the world and find points of interest where the quests begin. Our producer’s idea is to make the world the main character, not you. That you will want to learn the story of what happened on this planet, which is not-so-uninhabited after all.” 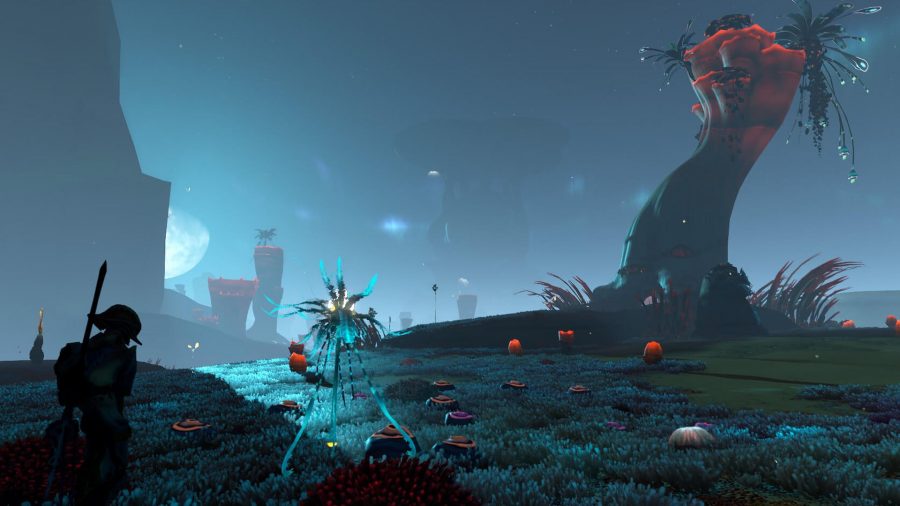 What Enplex Games are working on are the kind of vignettes you might find in a Bethesda game – two bodies, perhaps, and enough meticulously-placed detritus in the vicinity to tell a story without words. These scenes will be supported by notes and recordings (“Let’s call them holotapes”). But it’s worth noting that Bethesda has been perfecting this style of storytelling for decades. For a team new to the form, it’s a learning curve to convey information this way.

“We have a team of dedicated developers who have worked on many projects previously and they’re ready for the challenge, but getting every piece of that story puzzle right is going to take time,” Muratove says. “We’re working with two writers to get the lore together and make the questlines that will give people more incentives to explore that world.”

For this sci-fi survival MMO, it seems as if Bethesda holds all the answers – the examples to follow, and those to deviate from.