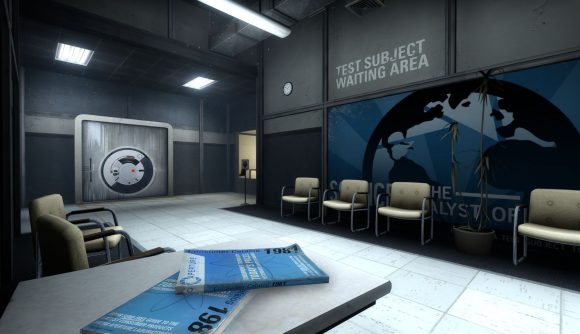 Every now and then we see modders produce work of professional quality, but it’s rarer still to see such production values replicated in promoting their work. The team behind ‘Desolation’, an ambitious mod for Valve’s classic puzzler Portal 2, is one of those exceptions: the devs’ latest update is a digital product catalogue that’s steeped in attention to the details of the Portal universe.

The catalogue appears on a webpage with a custom backdrop set in an Aperture Science facility, with an ambient soundtrack and occasional voiceover lines. These and the catalogue itself have striven to capture Portal’s irreverent, cynical humour: the catalogue advertises “tomorrow’s technology” at “today’s prices” and “yesterday’s safety standards.” You can check it out here.

Desolation aims to expand the Portal universe with a new single-player story that’s darker and more “unsettling” than the official Valve games, and more story-driven than other mods. You’ll play a woman waking up in an empty 1960s Relaxation Annex within Aperture Science. As you delve deeper into the facility and learn more about your past, the question isn’t whether you can survive an impending threat, but whether you can live with yourself.

The mod will add new gameplay features, some of which are mentioned in the product catalogue – though other entries in the catalogue may be red herrings. One catalogue item that we know is coming is green sticky gel, with which you can walk on, or stick boxes to, floors and ceilings. Take a look:

For more information, head to Desolation’s page on Mod DB. The devs’ last Q&A update came in October last year, and says that while development is going well, there isn’t a release date yet. It confirms about 40-50 test chambers of moderate difficulty, for an average playtime of roughly six to eight hours.

Read more: Portal 2 is one of the best co-op games on PC