Lionsgate and Valve have partnered up to offer a range of movies across Steam. Steam has previously allowed the streaming of indie flicks, but this marks the first major studio to add their licenses to Valve’s digital distribution platform. How good this news is depends on where you live at the moment.

Now you’ll be able to watch a film straight after playing one of the titles in our list of best free Steam games.

In the US, the partnership sees the launch of over 100 Lionsgate feature films, including movies from the Hunger Games, Twilight, Saw and Divergent franchises. More titles will be added as the partnership continues to expand worldwide, but if you’re living in the UK at the moment you might be a bit disappointed by the current selection.

Here are all 11 films you’re currently able to watch in the UK: 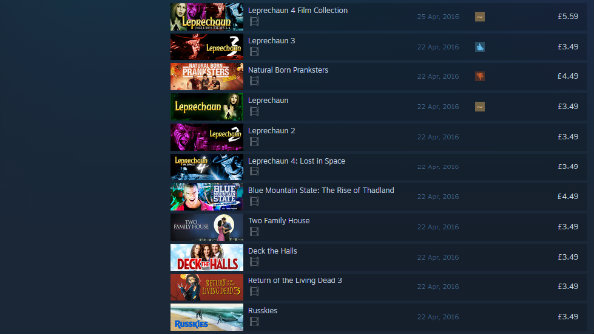 Who’s having a Leprechaun binge tonight, then?

“We’re delighted to partner with Steam, a leader in the digital entertainment and gaming space, as part of our commitment to remain at the cutting edge of innovation in delivering content to online audiences around the world,” said Lionsgate president of worldwide television & digital distribution Jim Packer. “With over 125 million users, Steam represents a unique, exciting and disruptive opportunity to expand our global distribution business.”

“Lionsgate has emerged as a major creative force with a deep pipeline of blockbuster franchises and commercially exciting, star-driven event films, making them important content suppliers for our platform,” added Valve head of marketing Doug Lombardi. “Their films are engaging audiences and fostering rich communities around the world, reflecting the kind of high-quality entertainment that we expect to drive the continued expansion of our content offering.”

Streaming movies is be available across all Steam-supported operating systems. To see what your region has to offer head to the Lionsgate developer page.