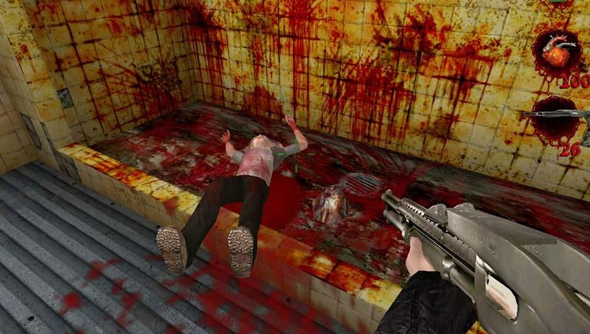 Postal 2’s got a dedicated fan base. Released back in 1998 it’s now 15 years old and still has enough of a following to see the game Greenlit for a Steam release and to convince the developers to release a new patch. The first in 10 years.

As well as adding Steam Achievements to Postal 2, the update makes a number of mods cannon as well as rolling in new features and fixes that have been the want of the community for literally years.

“The updates are entirely free to present and future owners of POSTAL 2, as a thankyou to our community for making POSTAL 2 on Steam a reality (DRM free versions will also get the updates in the new year),” write developer Running With Scissors.

Key updates include “Added an option for micro-transactions! you can now buy Champ new outfits for 10 bucks a piece, or pay for a 50 bucks season pass to obtain them all as they become available, before you’ve even seen what they are.

“Just kiddin’, but it’s shows the sad state of the industry when you probably half believed that whilst reading it.”

Here are the rest (patch notes ripped from Steam):

-Added ‘A week In Paradise (AWP)

A much requested feature was for us to add the updates from the very popular AWP mod into the base POSTAL 2 game. This means it is now possible to play POSTAL 2 and Apocalypse weekend in one playthrough. More than just a simple copy and paste, we have tweaked and improved many aspects of the game along the way.

One of the best new features of the Apocalypse weekend expansion pack was the dismemberment feature, and we have now rolled it back to the entire campaign.

More weapons to GOPOSTAL with:

NPC’s how carry bags, wear hats, shades and sport some funky hairdos. These are not the somewhat shabby one’s you saw in the original AWP mod but totally new ones made to a much higher standard.

We have also included a much greater variation in Zombies, courtesy again of the Eternal Damnation modification.

We said it would be 69, had to drop one at that last minute spoiling our silly fun. Still, should be enough to keep you going! There is also an in game achievement system for the benefit of future DRM free builds.

The widescreen stretching and hud issues are now fixed, and we also made the effort to get ultra wide screen working correctly, should you own an Eyefinity/Surround/Triplehead set up.

A couple of requested options from the community

You can now see through windows, how novel eh? Plus some other things here and there.

A small number of people were affected by a problem where the game would crash on launch unless the video settings matched the resolution of their desktop. This will allow users to set these options before they launch the game and save having to dig around configuration files. Furthermore it now allows access to the MP game via the desktop shortcut.

Also handy for those that want to idle for the trading cards but not play the game, but I’m sure no one would want to do that… right?

-Added an option for micro-transactions! you can now buy Champ new outfits for 10 bucks a piece, or pay for a 50 bucks season pass to obtain them all as they become available, before you’ve even seen what they are.

Just kiddin’, but it’s shows the sad state of the industry when you probably half believed that whilst reading it.

Hopefully you’ll never have to use this, but if you do, we’ll be sure to look into it.

-Fixed a collision crash that would sometimes occur with dismemberment

At least we hope, we’ve not been able to recreate it lately, we’ll be monitoring the crash reports. If you do have this issue please be sure to submit the crash report and explain what you were doing when it happened.

So go and recruit those attack dogs!

Although not all. We realized late into things we will have to redo most of the lighting to really solve this problem and we’ll look into it for a future patch.

-Lots of other little fixes

The obligatory elusive line everyone adds to their change log for no good reason.

We’ll be looking into adding workshop to POSTAL 2 in the next patch and we’ve started improving the modding tools to reflect that.

-Marquee select now works in the front and side viewports

-Added filters for the sound and static mesh browser windows