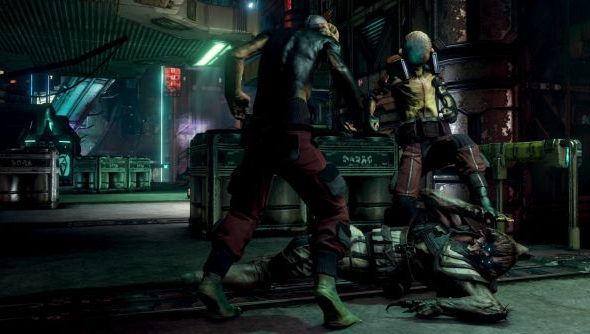 Remember Prey? It’s that FPS from a decade ago that did portals before Portal, weird, psychedelic pseudo-dreams before Far Cry and 10 year development times before Duke Nukem. A sequel was originally announced at E3 2011, but totally disappeared and was later cancelled. The cinematic trailer showed it off as a mix of Bladerunner and Star Wars, while leaked design documents suggested it would have System Shock 2’s blood running through its veins. Now, all rumours are pointing towards it coming back at E3, in development by Arkane Studios.

Things are about to get very silly in the world of upcoming PC games.

Fansite Aliennoire posted this tweet a few days ago, which went largely ignored without any sources to back it up:

June 14th will announce the new Prey game by Arkane Studios! Will it be a game you wonder why they called it Prey? #prey #prey2

For reference, Bethesda/Zenimax – who’ve owned the Prey IP since 2009 – have their conference on the 12th, while the 14th is the first day of the show proper. Since this tweet, Jason Schreier of Kotaku has said in a commenton the site that sources have told him the game will be announced at E3 too, putting a little more legitimacy on the claim.

As for what it might actually look like now, impossible to tell. Original devs Human Head announced in 2014 that they were no longer involved and the project had been cancelled. Since then some leaked e-mails, and Schreier’s comment, point towards Arkane taking the reins. While those are great hands to put your first-person action-adventure shooter in, what that means for the game is anyone’s guess. Even the name is up for debate, a sequel to Prey not being as relevant as it once was. They could go the Doom route of just taking off the number, or add a subtitle for a bit of jazz.

Assuming they keep that System Shock feel, they’ll be up against the actual System Shock 3 being made by Warren Spector et al. That’s not a phrase I’d have predicted writing a year ago. 2016 is a magical time. E3 just a month away now – start the hype engines. Harvey Smith, writer and game designer at Arkane, worked with Spector on Deus Ex back in the Ion Storm days, so it will be interesting to see both creator’s takes on the work.