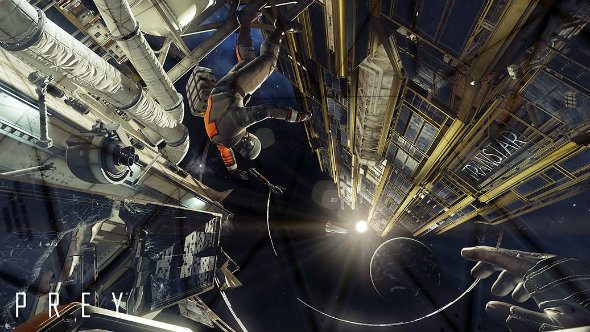 While Prey will share a lot of DNA with Arkane Studios’ other series, Dishonored, the two games will have completely different structures thanks to the upcoming sci-fi game’s space station setting. Whereas Dishonored and its sequel takes you to mini sandbox-style levels, Prey will be one big interconnected place.

Prepare for the claustrophobia by sampling our list of the best space games.

“It is one giant interconnected mission,” says lead designer Ricardo Bare in a Game Informer interview. “There’s a lot of re-traversal and a lot of gating, like ‘I can’t get into this space yet. but as soon as I get this power I will be able to’, that kind of thing.

“So there’s a fair comparison [with Metroidvania games] there. That’s one of the ways it’s different from Dishonored, because Dishonored is a mission-based game, whereas this game is more like another Arkane game called Arx Fatalis, which was one big underground, interconnected dungeon. In fact, early on in development we called [Prey] our ‘space dungeon game’.”

You’ll eventually get free reign over this space station too, once you’ve unlocked the required powers and equipment to move on, or perhaps when you’ve become strong or stealthy enough to bypass a new threat blocking the way.

As you play you will become more familiar with this space station, Talos 1, instead of becoming intimate with the space over multiple playthroughs like you do in Dishonored.

Apparently it’ll be challenging too. “It’s definitely a difficult game, especially as the game goes on,” says Bare. “I expect that players will have to change their strategy or experiment a lot when they encounter some of the different types of creatures.

“I mean, if there’s a spectrum [of difficulty], you’d probably describe the game as Dark Souls as hardcore – some of us are big fans of that game, so there’s a little splash of that in there. There are some survival elements and there’s some really hard challenges to overcome.”

Bare goes on to say he wouldn’t describe Prey as a survival game, just as he wouldn’t call it an RPG, though it has elements of both. The survival aspect manifests in degradable weapons and in the ‘trauma system’, which can see you break your legs while falling, or give you third-degree burns from malfunctioning robots, along with other possibilities for debilitating injury.

This was introduced to create dynamic goals and drama as you explore the facility, with you needing to hump it to a medical station to fix yourself back up and clear those injury-based debuffs. Bare says systems like this are leveraged to create emergent, player-driven moments that sit outside of the prescribed level design.