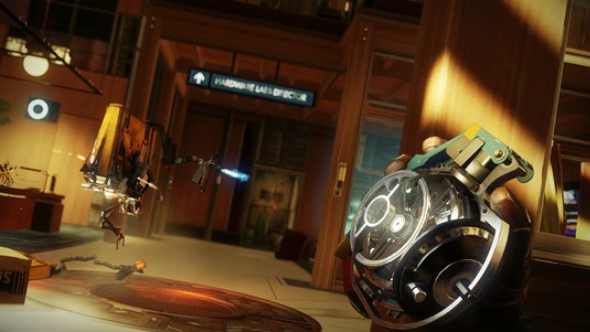 Morgan Yu and Groundhog Day’s Bill Murray are hardly doppelgangers, but there are similarities. At the time of Prey’s introduction sequence, Morgan appears to have been stuck in something of a rut, living the same day out over and over – wake up, go to facility to do baffling tests, rinse and repeat – for who knows how long. However, ‘90s comedy drama does not await. The exact circumstances of Morgan’s loop haven’t allowed the situational awareness needed for the wisecracks and world-weary hijinx that Murray came to make his calling card in Punxsutawney, PA. Like I said: not doppelgangers, but Morgan and Bill might find common ground if they got to talking.

Read more: check out these upcoming PC games if you’re in the mood.

The game begins in earnest with a wrench smashing through your flat window and exposing the world for what it is: a dingy test facility in which you’ve been the unwitting guinea-pig. Prey’s near-future world has gone to heck, and over the course of a tentative journey through that test facility’s corridors, you’re educated as to exactly how bad things have become.

Bad enough that any given object in a room might actually be a malevolent alien being, for example – worth keeping in mind for a bit of perspective the next time someone shares a doomsday prophecy from the news media on your Facebook timeline. These Mimics look like black wireframe models of Half-Life’s headcrabs in their true state, but are able to assume the form of bins, globes, and all manner of office bric-a-brac in order to lay in wait and ambush you. Hell of a mechanic for jump-scares, that, and it’s fortified by some excellent audio design and score on Arkane’s part. 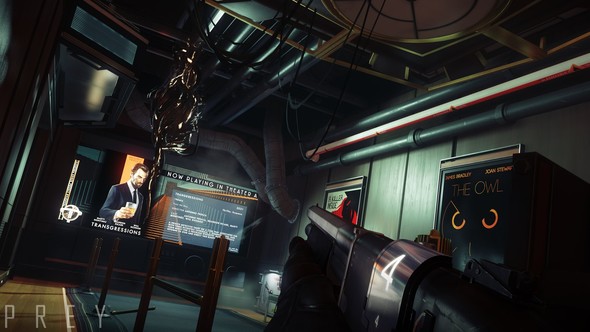 The Mimics, like like cadavers lining the corridors, are the results of – you’ll never guess – humanity’s scientific hubris. Lab-coated megalomaniacs rushing through with dangerous experiments involving extraterrestrial matter with scant regard for the risks. What began as a Soviet space station launched under the shroud of the Cold War has, in the intervening century, become a conduit for powerful and violent life forms that seem to have humanity on the ropes.

Just as you’re getting over your first Matrix moment and becoming acclimatised to your new lab rat reality, Prey hands you another red pill and expands itself once more: you’re somewhere within an enormous and abandoned vessel, floating through terrifying, infinite space. Standing in an enormous atrium with one wall comprised of sheet glass overlooking the abyss, and stairways and corridors leading off in all directions, the nature of your shapeshifting enemy really starts to get under your skin.

It’s also at this point when you first have chance to take stock of Prey’s linear-ish intro and reflect on its influences. For a game assembled under Arkane Studios’ illustrious name, it doesn’t bear much comparison to Dishonored beyond a weapons/abilities wheel. Not in the opening hour, at least. It’s worth noting at this point that – heartbreakingly – I didn’t play long enough with this preview build to gain the ability that’ll let you transmogrify into a mug. And that feels like an Arcane move. 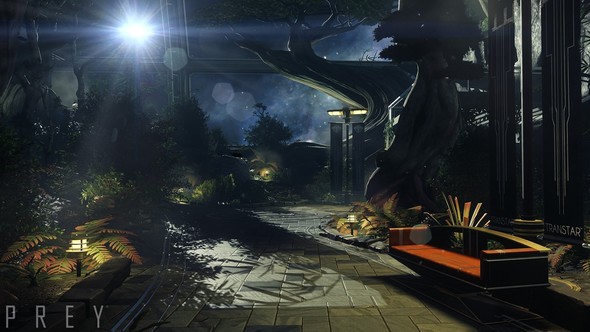 But the sense you get of the fictional universe washing over you until you’re completely immersed – that’s lacking. There’s environmental storytelling everywhere, don’t get me wrong. Every computer terminal has a few emails on it that offer clues about the bigger picture, or a certain character’s motivations. But you’d expect that – Prey would hardly be able to show its face at the next Immersive Sim Club meeting without those basics. What doesn’t come through in the opening is the sense of a distinct or rich fiction that you might really lose yourself in; we’ve been on space stations where things have gone awry before. We’ve been in experimentation labs where things aren’t all they seem before, too. Prey does riff on those ideas with some fresh ideas in its opening, but the fiction here’s certainly not made up out of whole cloth.

It isn’t until reaching the atrium of Prey’s first real hub area that you find the familiar labyrinthine level design, either. What a welcome sight it is to behold, though. Multiple routes across ledges, across hanging architectural fancies, beyond chaotic barricades all await Morgan (who can be played as a male or female, incidentally, though I didn’t spot any changes to gameplay yet dependent on gender). 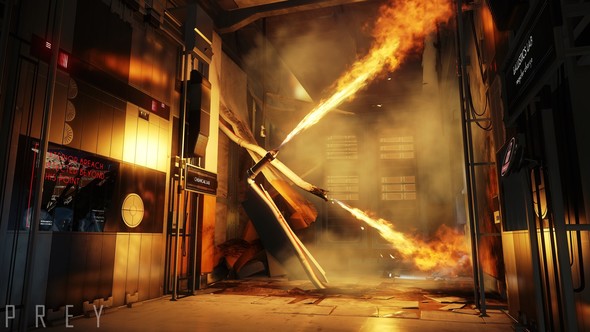 There’s more to worry about than the mimics, though. Larger, stooped beings shuffle around, a detection meter hovering above them and the score swelling whenever you get eyes-on. I’d like to tell you what the combat’s like with these… things… but frankly I never dared start a fight with them. I can tell you that their detection meters are generous enough that you can run away from them. I did find great amusement by combining the GLOO gun (let’s not mess about, it’s a glue gun) and the wrench, though. The former sticks your slippery assailants in place within a hunk of crystallised mess, while the latter shatters them in their suspended animation. A great little sequence involving a lower-tier foe whom most games would simply have you whack at with a crowbar.

The last weapon I was able to add to my arsenal in Prey’s opening hour is a shotgun, which can also be used to great effect after dabbing some GLOO around. It also suggests moments of more traditional combat should you wish to play that way. In fact, looking at the various directions you take take Morgan’s stats it appears you can mold Prey into a reasonably traditional shooter if you like. Just boost your health, improve your weapon accuracy, and summon a few Duke Nukem lines to rasp at your adversaries.

Play a bit of Prey at preview stage and the question you’ll be asked by everyone afterwards is: ‘Is it like Dishonored in space?’ The curious reality is that for the opening hour at least, it plays more like Bioshock in space. And no, not System Shock, which was literally Bioshock in space. I mean Bioshock: art-deco influence in every piece of furniture and architecture, steady drip-feed of information via radio buddy about arrogant scientists going too far, questioning the nature of reality, and feeling lost and isolated in a once great facility. 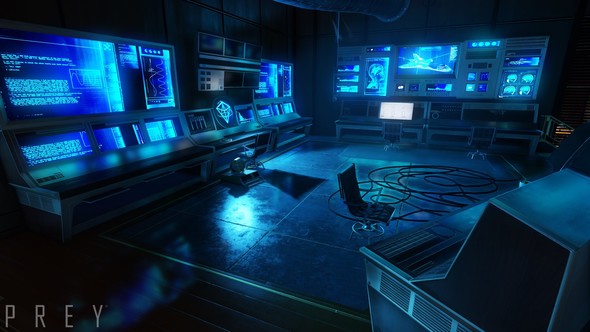 I’m chalking that up partly to this being the very first hour, a chunk of game that has a very specific job and rarely plays exactly like the rest of the experience. But there are too many similarities for it to be completely coincidental, surely? In any event, it hardly poses a problem. Bioshock was a good game, wasn’t it? Prey’s looking capable of being a good game too, and will have many more hours to exert its character than I’ve witnessed so far.

We only have a few months to ponder Prey’s final product before experiencing it. When May 5 comes around many will still be expecting Dishonored in Space, and it appears Arkane have different ideas for their reboot of a cancelled reboot of a cancelled sequel to a decent shooter. Ideas that meld survival horror with immersive sim, shooter with stealth game, and claustrophobic linear shooter with sandbox hub environment.